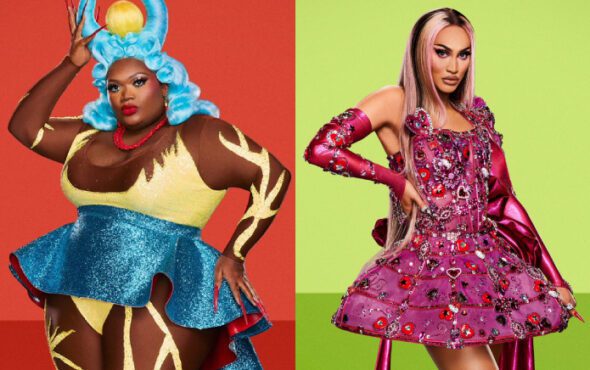 Drag Race season 14-star Kornbread “The Snack” Jeté revealed that Kerri Colby was one of the first people she ever came out to.

For the last two weeks, Drag Race fans have been immersed in the brand new season and its new batch of queens.

Like its predecessors, the first two episodes have featured twists and gag-worthy turns that have left viewers on the edge of their seats.

But what makes this season even more herstoric is the inclusion of two Black transgender queens competing for the coveted crown.

Since their debut, Kornbread and Kerri won over audiences with their show-stopping looks and sickening performance skills.

In the first episode, the two even alluded to having a close sisterly bond off camera.

In an interview with Out Magazine, Kornbread opened up about her relationship with Kerri and said she was one of the first people she told about her trans identity.

“I’ve known Kerri before this, we’ve been friends before this. Fun fact, Kerri was one of the first people that I came out to as trans,” she said.

“She actually helped me through my journey. The peak of me starting everything was actually going to Drag Race and she knew some stuff, but no one else knew anything about it.

“So it’s good to have that kind of comfort person there as well as somebody that knows exactly what you’re going through and who’s gonna calm you down when your mood swings are about to pop up, because they happen.”

She went on to call Kerri one of her “favourite human beings” and described her as “extremely sweet, funny and humble.”

“No matter how gorgeous the bitch looks, I promise you she’s a very humble and sweet person and very caring, so I’m here for her,” she added.

In an additional Out interview, Kerri echoed similar sentiments for Kornbread and said it was “a dream come true” to see her on set.

“Me and Kornbread have been Judies for a while, back before Drag Race or auditions or anything like that, so it just really made me feel comfortable.”

Towards the end of the interview, she opened up about the two showcasing “authentic trans women” throughout the season.

“The fact that we get to showcase not just one but two fully authentic women of trans conviction going into the show and on top of that people of color, I think that it is our time,” she said.

We can’t wait to see more of Kornbread and Kerri’s iconic friendship in the upcoming episodes.

Click here to get more tea from their in-depth interviews.