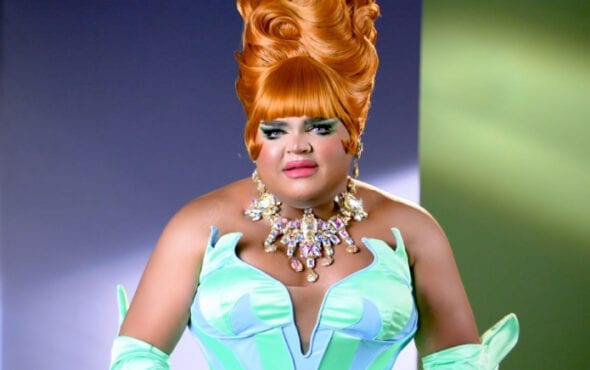 The top four has officially been chosen ya’ll.

It’s getting down to the nitty gritty on RuPaul’s Drag Race season 13 and the queens are feeling it.

For this week’s maxi-challenge, the girls were given starring roles in the sci-fi feature Henny, I Shrunk The Drag Queens.

Even though each queen displayed star power, the judges expressed their disappointment with Olivia Lux and Kandy Muse’s performances and runway lewks.

In Untucked, the contestants discussed the judges’ critiques and that awkward exchange about who should go home.

Walking into the workroom, the exhausted queens decompressed from the tense-filled runway.

After getting settled with their drinks, Gottmik asked how Olivia and Kandy were feeling.

“I mean it never feels the greatest to be the majority vote in that question,” Olivia answered.

In her confessional, Olivia elaborated about being voted to go home, stating that she felt overlooked.

“It’s so frustrating hearing your sisters say that they don’t see you going as far as them,” she said.

Olivia went on to defend herself, stating that she knows who she is and that she came to Drag Race to “explore”.

“Um, I definitely didn’t take your answer to the heart. I feel disappointed because we’re almost at the end of the competition and you want to be doing your best,” she said.

“I feel like I went from all the way up here and then completely dropped on my ass again. And I’m obviously in the bottom tonight lip-syncing for my life.”

Kandy went on to say that being in the bottom was messing with her head and that she’s determined to “go off” in the lip-sync.

Even with the lip-sync looming of their head, Olivia kept it cool, calm and collected while expressing her drive to win.

While the judges continued to deliberate, the queens were treated to an appearance from Olivia’s mother and grandmother.

Olivia also opened up about her rocky past with Grandma Lux.

“Right before I came here my grandma told me that she doesn’t think she could be a part of anything drag for me,” she said.

“We had the biggest fight we ever had, right before I got here.”

Olivia became visibly emotional and opened up about feeling loved by her family and her future as a drag queen.

After comforting Olivia, Gottmik asked if Kandy was doing okay.

“We’re right… I can taste the crown, we’re right there. I don’t even know how I’m going to react or feel if I do not make it to the top four tonight,” she said.

Kandy then went on to tell the queens that she felt light-headed and that she needed air.

An on-set medic came to help the queen and informed her that her blood pressure was high and that her heart rate was beating quickly.

After checking on Kandy, Symone went to inform the other girls that she had a panic attack.

It wasn’t too long until Kandy came back into the workroom and opened up about the situation.

“I don’t know if it was the heat or the pressure of everything and everything at one time I just felt in my chest,” she explained.

After the Untucked episode aired, Kandy took to Twitter to give more insight on the situation.

“As dramatic as it may seem, having a panicked attack on set wasn’t fun, I almost wasn’t allowed to lip-sync, I was coming off of a win straight to the bottom 2 the week before the top 4, everything was sitting right on my chest. Drag race is hard,” she wrote.

as dramatic as it may seem, having a panicked attack on set wasn’t fun, I almost wasn’t allowed to lip sync, I was coming off of a win straight to the bottom 2 the week before the top 4, everything was sitting right on my chest. Drag race is hard.

In the end, Kandy came out on top and won the lip-sync against Olivia, securing her spot in the top four.

On next week’s finale, the queens are tasked with delivering iconic performances to RuPaul’s brand new track Lucky.