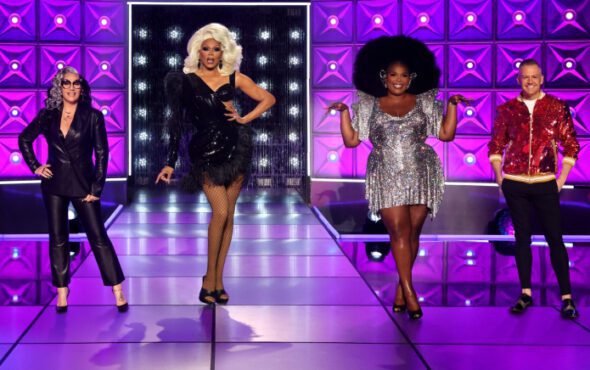 Pack your make-up brushes and your most sickening outfits because RuPaul’s Drag Race season 14 is officially here!

After eight long months, everyone’s favourite franchise returned with a new batch of queens vying for the crown.

Like seasons six and 12, the premiere episode only introduced half of the sickening talent: Alyssa Hunter, Bosco, Kornbread “The Snack” Jeté, Willow Pill, Kerri Colby, June Jambalaya, and Orion Story.

After each of the queens’ unique introductions, the iconic RuMail sounding alarm filled the werkroom signalling Mama Ru’s entrance.

The drag icon wasted no time informing the girls about the split premiere, stating: “Now, to get to know each of you better, we’re introducing the season 14 queens over two episodes.”

But in true Drag Race fashion, Ru dropped another bomb and revealed that one out of the seven would sashay away.

“I am sh*ting bricks. It is nerves. I am shaking like a stripper on a Friday night, honey,” June Jambalaya said.

After the shocking news settled, the queens were tasked with their first “freaky” photoshoot mini-challenge.

Rather than having a basic shoot, Mama Ru instructed the girls to pose while spinning on the lip-sync smackdown for the crown wheel.

In the end, Kerri Colby came out on top and took home the coveted prize.

After announcing the winner, Ru revealed the first maxi-challenge of the season.

“Now, for your first maxi-challenge, we’re putting on a show. You will be performing at the prestigious, charisma, nerve and talent show, the CNT’s,” he explained.

Before the talent extravaganza, the queens were treated to a surprise visit from guest judge Lizzo – who gave them some sage advice.

“Your life is about to change forever. So just embrace it. Soak it up. Be a mother f**king star,” she exclaimed. “Show these bitches who’s boss.”

With the queens baked and ready, Mama Ru took to the stage to introduce the panel of judges and perform his brand new song, Catwalk.

June Jambalaya then opened up the CNT’s by performing an intricate African dance routine.

Bosco followed up June’s performance with a sultry Burlesque number that ended with a mouth-dropping finish.

Alyssa Hunter then hit the stage with a pop-punk lip-sync paired with a fabulous pink guitar “solo”.

Kerri Colby introduced the first lip-sync hybrid of the night that included a full-on jump rope routine to Anaconda by Nicki Minaj.

The show then shifted to comedy with Orion Story’s polarizing aerobic teacher skit.

Kornbread wasted no time to show the crowd her talents and left the studio gagged with an iconic lip-sync to her original track.

The CNT’S ended on a high note with Willow Pill’s campy lip-sync/self-care tutorial to Enya’s classic track Only Time.

After sashaying down the runway in their “signature show-stopping drag”, the judges deliberated on their CNT performances and ensembles.

At the end of the episode, Kornbread was named the winner of the maxi challenge – which left June and Orion competing in the season’s first lip-sync battle.

Even though both queens danced and sang for their life, June ended up on top and was saved by Mama Ru.

Next week, we’ll see the second batch of new queens and an appearance from singer-songwriter Alicia Keys.

Soon after the premiere, fans quickly pointed out Lizzo’s iconic appearance, with many stating that she stole the show.

Check out all the fans reactions for the season 14 premiere below.

Oh Kornbread is the entire package, ya’ll better hope she can’t sew or sing or something because bitch that performance was everything! #DragRace #rupaulsdragrace pic.twitter.com/8Zw762qAhr

From now on, I will enter & exit a room like @lizzo #icon #queen #rupaulsdragrace pic.twitter.com/PvUG3S66HZ

idk what i just watched but i loved every minute of it #rupaulsdragrace pic.twitter.com/t6j4rM3Ssc

Lizzo out here about to throw hands at Michelle for coming at Kornbread! #DragRace, #RupaulsDragRace pic.twitter.com/eAlimNFBUD

this is a kerri colby stan account. nothing less or more. imagine serving looks in the confessional and werk room. ✨#rupaulsdragrace pic.twitter.com/uA0e30Ic7p

The TALENT this season is so fucking amazing #rupaulsdragrace pic.twitter.com/ImBWjAIQAk

If @kornbreadTMFS doesn’t go on tour with @lizzo then what are we even doing here?? #rupaulsdragrace pic.twitter.com/rrpK402b2f

ru paul after slowly walking up and down the runway during that number #rupaulsdragrace pic.twitter.com/JpFrGij0D2