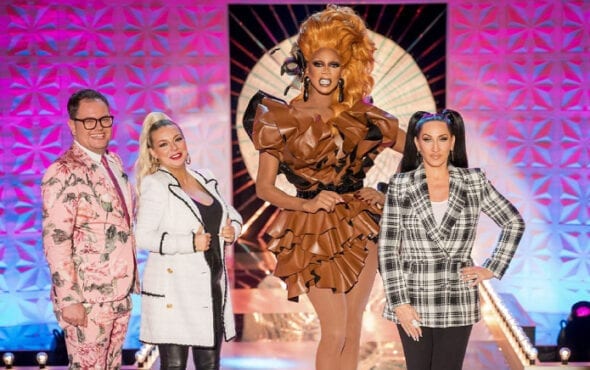 RuPaul’s Drag Race delivered one of its finest Rusicals to date on this week’s UK episode.

Following the controversial – we repeat, controversial – elimination of Joe Black in the premiere, the 11 remaining contestants were tasked with singing (live!) in a parody of the critically--reviewed Cats film.

Beforehand, RuPaul instigated the drama and conflama when he asked the queens to hit the polls and vote in four separate categories: Secretary of Shade, Baroness Basic, Trade Minister and Lord of Lording It Up.

To the surprise of no one, A’Whora ‘won’ shadiest queen while Tayce was honoured as the most attractive contestant out of drag. Lawrence was voted as the cockiest and Tia the most basic (despite serving her now-iconic Alan Turing-inspired runway).

In a surprise twist, the latter was tasked with assigning the roles, which led to some friction between veteran entertainers Veronica Green and Cherry Valentine. Veronica ultimately earned the Evita-esque role, but the drama continued as Lawrence Chaney suffered a mini-breakdown in rehearsal. In another surprise twist, it appears as if not all gay men can sing and dance. What’s real anymore?

Prior to hitting the runway, Cherry confided in her season one sister, Sister Sister Sister Sister, about her complicated childhood. The Darlington-born contestant, who’s also a qualified nurse, was born into a travelling family – a community that’s not particularly welcoming of the LGBTQ+ community.

“I was always brought up that you’ll find a wife, you’ll get married, you’ll have some kind of kids, you’ll be the man of the family,” admitted Cherry. “When I started having feelings of being gay and being different, that wasn’t right in my mind.”

She continued: “In the travelling community there is toxic masculinity, so being a drag queen and working in make-up, and being a nurse, all these things have things behind them that say, ‘A man shouldn’t do this.'”

In the werkroom, A’Whora and Tayce turned up the heat when both queens admitted their votes for Trade Minister. Spoiler alert: they voted for each other. Are we about to see another Vanjie and Brooke Lynn Hytes-esque romance blossom? We dont mean to jump the boom boom gun but this season is just [insert chef’s kiss].

The maxi-challenge went off without a hitch, with Veronica, Tia, A’Whora, Bimini Bon Boulash and Ellie Diamond standing out amongst the pack, whilst Cherry, Lawrence and Tayce were deemed the bottom three contestants of the week. Sadly, Cherry faded into the background and Tayce lacked the confidence – and according to the judges – enunciation for the part, while Lawrence didn’t go full throttle.

Ultimately, Veronica emerged as the MVP of Rats: The Rusical and Cherry and Tayce faced off in the lip-sync showdown to Memory from Elaine Page, with the former following in the footsteps of Joe and sashaying away from the competition. In the words of one fan, “I wish they’d stop making it so obvious who goes home by how much attention the episode gives to their personal story.”

Give @ShadyLawrence her own TV show. Let her read the news, present the weather, moderate Question Time, anything.

She should never *not* be on TV, and I'm so proud to be a Glaswegian watching her.#DragRaceUK pic.twitter.com/3DAVqEVBnf

we were robbed of this runway look and i’ll never forgive the #DragRaceUK judges for it pic.twitter.com/npP984XNNq

On the next instalment of Drag Race UK, the contestant’s sewing skills will put to their test as they’re pitted against one another in a design challenge called Who Wore It Best? Jourdan Dunn will join the judging panel.

The first two episodes of season two are now available to stream on BBC iPlayer.