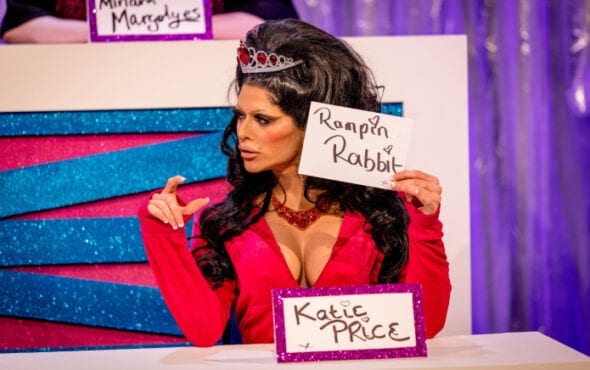 RuPaul’s Drag Race UK star Bimini Bon Boulash has reflected on her iconic Snatch Game performance to the pwess (aka us).

The East London vegan makes a special guest appearance on the latest episode of Snatched!, which sees Associate Editor Sam Damshenas and Fashion Editor Umar Sarwar reflect on the best (and worst) impersonations in herstory.

Bimini reminisces on her hilarious impersonation of British model and television personality, Katie Price (The Pwicey!), before revealing some behind-the-scenes tea that didn’t make the final edit.

“I think everyone was a lot funnier than they came across. Tayce didn’t come across as funny to me on the telly as she did when we were sat there. I was pissing myself,” she admits.

“She obviously did well and she was high, but Tayce was undoubtedly hilarious. I wanna see the unedited versions!”

After sharing her favourite Snatch Games throughout the years, as well as the celebrity that should never be impersonated, Bimini reveals that the contestants are not permitted to leave the panel, even for a minute, to use the bathroom.

How to Play The Snatch Game & Win! is now available on all streaming services.

Sam and Umar are also joined by All Stars 4 winner Trinity the Tuck, who reflects on her beloved impression of Caitlyn Jenner, her drama with Gia Gunn and who she’d like to impersonate on a potential Drag Race winners’ season.

Listen to How to Play The Snatch Game & Win! with Bimini Bon Boulash and Trinity the Tuck here on Spotify and Apple Podcasts or below.