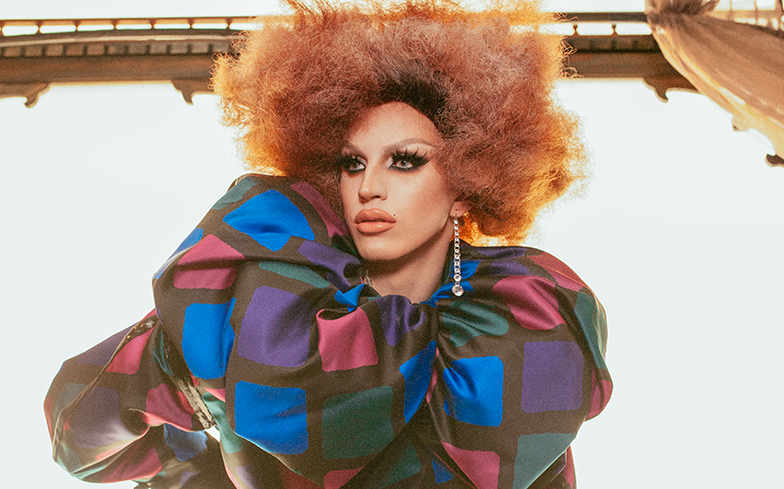 Originally touted as just a “fashion kween”, NYC performer Aquaria sashayed into the Drag Race werk room this year with a fierce and revered reputation in the drag community.

Did she live up to it? Oh honey. Week after week, she left us cooped, gooped and positively gagged at her sickening high-fashion lewks, with Mama Ru even declaring her one of the top four fashion girls in Drag Race HE§Rstory alongside legendary alumni Raja, Detox and Violet Chachki. I mean, look at her photo shoot for us… Wig? Wig. “I’ve always had a very head-to-toe, fully realised concept of my drag,” she tells us. “I want to create full conceptive looks that keep delivering to the next level.” But it’s not just her polished aesthetic that left fans snatched.

Halfway through the series, we nearly contacted the FBI because Aquaria lit-er-ally poached our mother-tucking wigs from our scalps thanks to her genius, soon-to-be iconic impersonation of the First Lady of the United States, Melania Trump. Fashion? Check. Sharp comedic talent? Check. These two combined qualities – undeniably rare for such a young queen (22-years-old) – led to Aquaria becoming the 13th performer to win the title of America’s Next Drag Superstar, and the youngest winner since its inception nine years ago. “I finally get to travel the world and meet my fans, and to perform in places that I would never normally get to perform at, so I love it,” she beams. But how did she become one of the biggest drag acts in the world?

Aquaria credits RPDR runner-up and drag veteran Nina Flowers as one of her main sources of inspiration. “I remember watching season one and seeing Nina Flowers, and she was very different to my knowledge of drag,” she explains. Fashion-wise? The aforementioned season three champion Raja, who became one of the first queens to serve editorial-esque, fully-realised concepts with her lewks. “Watching Raja was really cool for me, I really loved the way she stomped down the runway in a unique, high-fashion way.” Raja’s season, which featured more sewing challenges than any other, prepared Aquaria for her inevitable season 10 slayage. “I envisioned, ‘Oh, if I was given this cake runway, what would I do?’” So, what did she do? In the first episode, she used her skills to construct a runway outfit from miscellaneous items found at a variety store, and slayed. A couple weeks later, she created three looks based on climate change; Alaskan Winter Realness, Miami Summer Realness, and Martian Eleganza Extravaganza, and slayed. Later down the line, she presented two characters on the main stage: best self and evil twin, and – you see where we’re going with this, right? She’s the Buffy of Drag Race, basically. When it comes to the other stuff, she of course brings up her mentor, Sharon Needles – who, FYI, is not her drag mother, so if you read otherwise on Reddit or rupaulsdragrace.wikia.com then, yeah, it’s false. “I’ve been with Sharon for a while now, she would come to visit my shows, hang out, and from there we’ve become good friends,” she reveals. “She’s been along with me for the ride. She had suggestions, but more about life rather than how to put on an eyelash!”

So yas, Aquaria has been incredibly inspired by the show – like any other queen – but insists: “My drag references span much further than RuPaul’s Drag Race – not to discredit the show by any means.” During her season 10 journey, this was evident as we witnessed the star cite her main sources of inspiration, whether it be Mugler, Madonna, or Michele Lamy, which proved that she’s not just a product of the show, like most would assume. Aquaria has done her research, she’s honoured fashion icons throughout history, and she’s ready to carry on their legacy. “I think a lot of my drag is knowing what’s come before me, whether that’s drag or fashion, and just really reinterpreting that. I know things that people don’t expect some 22-year-old to know. I went into the werk room saying all these things, and trying to tell people that I knew what I was talking about and no one believed me! I got to show them and prove to them that I do.”

Even with $100,000 doollaz at her disposal, Aquaria – being the humble queen she is – tells us that she’s investing it back into her art, and says to keep it as far away from her as possible. Instead of doshing out and spending hella mulla on some new lewks, she strongly declares: “We need to fully support queer artists because there’s so many talented people who don’t have large budgets or lots of connections to make their visions happen.” This attitude and frustration in regards to struggling queer performers is precisely why the queen recently engaged in a heated Twitter spat with a certain American singer/songwriter.

For those who follow Aquaria on social media, you’ll have noticed her disagreement with Bebe Rexha, who called out the season 10 queens for being “cold AF” after an encounter at VH1’s 2018 Trailblazer Honors. “Drag queens are painted in such a way that people think that because we’re more successful than we were a year ago, that we’ve become bitchy brats,” she explains to us. “Because we don’t wanna be your little sidekick, your little drag bitch to fawn all over you, now we get some tweet written up about us to your millions of fans that are going to paint us in a specific way? I think especially at an event that was meant to honour trailblazers like James Baldwin, the ACLU, Ryan Murphy and the cast of Pose – it was very disrespectful to the purpose of the evening, and to the people who were honoured.”

But this isn’t just your regular bitchy encounter between two superstars ala Katy and Taylor. It’s a part of the wider conversation to how queer artists – especially drag performers – are treated by society as a whole. “Me, Kameron, Asia and Eureka don’t give a shit about the amount of fans we have over someone else, or vice versa, the four of us just care about not having some person who does have privilege and more popularity and funding of their work to put us down and give us a bad rep

“Half of our jobs is based around meeting our fans and these really quick impressions we have, so when someone famous goes online and thinks that they were mistreated, which they weren’t… we now have people saying that we’re bad at 50% of our job. A lot of people know that we’re not like that, but a lot of people don’t. And me standing up for the four us looks stupid, because we’re just the fucking clowns who got to introduce you at the big, charitable honours ceremony.” Fans reading this article will know that Aquaria isn’t that person. This writer here spoke to the winner during one of the busiest weeks of her life, and can confirm that she’s polite, well-mannered, humble and as charismatic on the show as she was in person. Cold AF? Absolutely not. And when Aquaria and I discussed the Bebe beef, I could hear the concern in her voice. This wasn’t a young 22-year-old biting back, this was a 22-year-old in fear of being negatively perceived by fans who have supported her throughout her career. “I’m not sitting over there saying, ‘Fuck those bitches, I’m not gonna hug her’. That’s not what I do. I know who all the kids are at my meet and greets and I’m so excited to see all of them.” Aquaria passionately continues: “It’s not that we don’t want to give everyone all the love in the world, this is why we do our jobs because we love meeting people and we love this whole experience. We’re not going to the fucking VH1 Trailblazers Honours just to be stuck up, little faggy cunts. That’s not what we’re there for. We’re not the fucking mean kids.”

What she is here for, however, is to make her mark on the world of fashion, drag, even music, because – why the fuck not? At the end of June, the fashionista unveiled her fierce debut single Burn Rubber. The uptempo Madonna-esque dance anthem – penned by American singer/songwriter Jesse Saint John – sees the NYC queen boasting about her “Lamborghini body” while “rolling through the metal party”, and we are here for it hunties. H-E-R-E, here! “I like tracks with high energy, with a little bit of oomph to them, and a bit of fun. For me, nothing says that quite like the intensity of the dance vibe we brought to Burn Rubber.” Part of the inspiration? Drag Race, that show she was on. “It still has that duality, where it talks about competing in a car race, but also because I was literally on Drag Race. It’s just a great song that you can bump in the gym, bump in the club, wherever!” But Aquaria wants to make it clear that she’s not promoting herself as a vocalist. “I understand that I’m not Christina Aguilera or Ariana Grande, but I love being in charge, being in control of a lot of the details of my drag performance, and one of those details is music. Being able to create my own concept is important for me.”

Aquaria’s initial reaction to the subject of her music exuded excitement, but quickly turned serious when she raised an important issue within the industry that is often overlooked – criticism at queer artists for releasing queer sounding music. “People need to be a lot more forgiving and accepting of musicians sounding queer and draggy, and not expect us to all sound like our straight counterparts and competitors.” Yes, there are LGBTQ musicians on the charts releasing some incredible material: Sam Smith, Kehlani, Leland, Years & Years, Kim Petras, Hayley Kiyoko, Troye Sivan and MNEK to name a few, but some are often criticised for sounding ‘too gay’, or in Aquaria’s words, “too faggy”. “I think that is a type of homophobia,” she tells us. “Even when we were writing in the studio with Jesse, he noted that his music can sometimes be too gay for people.” But will we be treated to more ‘faggy’ music from Aquaria? She doesn’t know. “If I created a body of work large enough – and if I was inspired long enough for a period to release a large body of work – I think that it would be a great idea. A little too soon to speak, but if I do a project relating to anything, I like to go big or go home.”

So Drag Race fans, if you wanna be treated to some more pop-bops from your current reigning queen, get streaming Burn Rubber – and Looks, her collaboration with Linux (because it’s a banger) – on Spotify. And if you fancy seeing her perform, turning looks and stunting pretty, she informs us: “I’m gonna be travelling around a lot in these next couple of months, lots of tours, lots of shows out of town, so stay tuned to ageofaquaria.com to see my full calendar. I’ve got plenty of places where I can come see you, plenty of places where you can come see me.” Aquaria leaves the interview with a confident, unapologetic proclamation to her haters: “To all the songwriters out there who think that they’ve got so much going on, bitch, try my schedule.” T? Spilt.