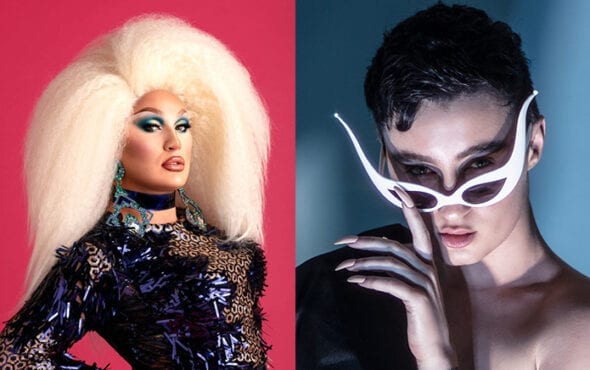 RuPaul Drag Race UK season 1 winner The Vivienne has shown support for the first trans male competitor in the US series.

Gottmik has become an icon of trans visibility in the LGBTQ+ drag scene and he will now make history as Drag Race’s first openly trans male competitor on the show.

The Vivienne opened up to the Metro about supporting Gottmik, saying: “It’s such great news because he’s actually a really good friend of mine as well.

“He did my make-up on my own show in Hollywood, so to see him be cast is just an amazing. What an amazing message to send.”

Speaking exclusively to GAY TIMES in a previous Amplify digital cover story, Gottmik shared their experience about transitioning and how he found the process.

“People cannot seem to understand how someone born female can identify as a man but still want to perform and artistically express themselves through femme drag,” Gottmik told us. “In my opinion, a healthy soul/person needs a good balance of masculine and feminine energy to survive.”

Using his growing platform, the artist hopes to use the attention he has been gaining to be a positive example. “Being so feminine held me back from acting on my transition for a long time,” he explained.

“Even though I knew I identified as a male, I always thought that I could suppress it because I loved feminine things and had feminine articulations, but when I realise that men can be feminine, it all clicked.

“As of now, there aren’t a lot FTM drag queens so I felt kind of alone and invalidated. I hope that sharing my story and being more open will help other femme trans boys live their fantasy the way I’m living mine.”

Hi gorg 💓 It's obvious @Gottmik is serving lewks, but have you watched her Meet The Queens? #DragRace premieres NEW YEAR'S DAY at 8/7c on @VH1! pic.twitter.com/3x9HKjg1s8

Drag Race UK season two will coincide with the release of Drag Race season 13 in the US, which was recently confirmed to premiere 1 January on VH1. You can read the bios for each contestant here.

The sixth season of All Stars has also been confirmed to air in 2021 (here are the rumoured contestants) and, following the monumental success of Canada’s Drag Race and Drag Race Holland, we can presume that sophomore seasons are in the works for both.