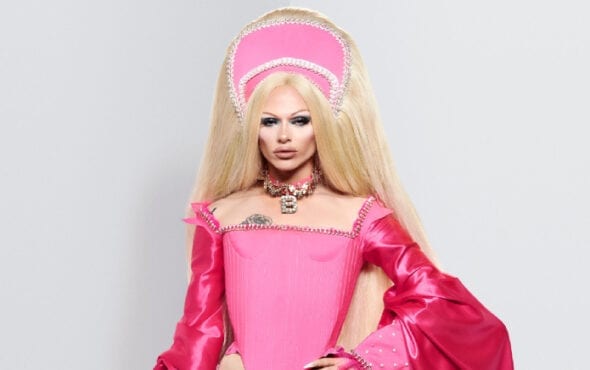 Drag Race UK star Bimini Bon Boulash discussed their non-binary identity and the power of drag in a new interview.

Sitting down with the Evening Standard, Bimini discussed their gender identity and when they knew they were non-binary.

“I always knew that I was neither here nor there – like I was in between. That’s how I’ve always felt,” she said.

“The term ‘non-binary’ only came around [into currency] a couple of years ago. I realised it made sense.

“Before, the terms that everyone used were ‘genderqueer’, or ‘gender non-confirming.’ A lot of problems are rooted in gender: sexism, discrimination.”

Bimini also touched on the power of drag and using the craft to fight for LGBTQ+ rights.

“As a drag artist you don’t have to be political but I think what you do is political – in a sense, anyway. You’re going against what is expected of you and kind of mocking what’s going on,” she explained.

“The rollback on trans rights is scary. There’s a lot of good happening among the trans community, rallying together in allyship. It’s about understanding language and rhetoric. I think we will get there.

“I have a lot of trans friends, and they go through so much. Their journey is so different: they get all this hate and stigma attached to them and it’s really heartbreaking. We have to protect those because they’re vulnerable.”

Since their debut on Drag Race UK season two, Bimini has been vocal about the importance of non-binary representation.

Earlier this year, the entertainer announced that they were signed to Next Models.

Bimini said that this accomplishment was a “huge” moment for “non-binary representation in fashion.”

“Never in my wildest dreams would I have ever thought this possible,” they wrote.

“This opportunity is a huge crazy, mind-blowing moment for my gender-non comforting a*s and to top it all off they have signed me to the managements main booking list rather than special bookings.”

Speaking with British Vogue, Bimini said their contract with Next is significant because “there’s just not been that many people out and proud as non-binary” and that androgyny is “not easy”.

“There shouldn’t be boxes or labels that we put upon ourselves,” Bimini explained.

“I go against the norms of gender but that’s just how it fits me. Masculinity and femininity has always been quite difficult because I was never overly masculine, and femininity can be seen as a weakness in society. It’s a tricky path to navigate.”