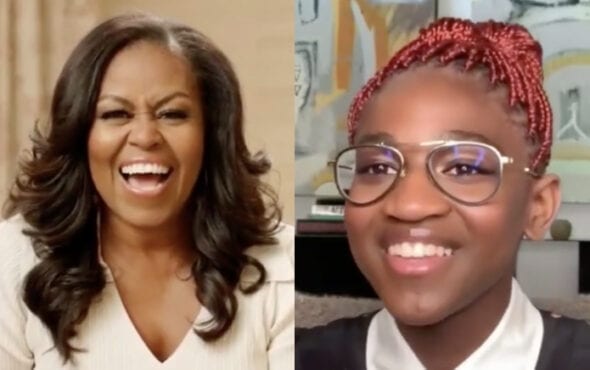 At the start of the Instagram interview, the 13-year-old expressed her excitement for the meetup, stating: “I’m just like nervous but really excited. It’s like I’m meeting an idol.

She continued: “I’m literally meeting an idol, but like just preparing for this moment for so long, I’m very excited for today.

After the initial jitters disappeared, Zaya went on to ask Michelle Obama if she had any advice for teens that are striving to live their authentic lives.

“What advice do you have for teens, who want to be themselves and thrive? Like you have and currently are. ,” she asked.

Before diving into her answer the former First Lady gave Zaya praise for living her truth and being a role model for other young teens.

“Well like you have and currently are. You know, I mean, I am just so proud of you, being an amazing role model and embracing your truth.

“You’re already doing this, so maybe this I for some other young people that are listening,” she said.

The author then went on to give Zaya and other teens watching an inspiring pep talk.

“So my first piece of advice is to be patient with yourself, number one, she said. “At your age, or in the teenage years probably through your 20’s, you’re gonna be experimenting with so many versions of yourself, right?

Michelle then poised the same question to Zaya, leading to the young talent giving her own advice to teens.

“I mean based off my experiences, I’d probably say the same, like even right now, I’m trying to branch out and try more things.

“[…] I had this one friend… who was very different and no one really thought that we’d be good friends, and now she’s my best friend of four years… I think getting a perspective from someone who isn’t like you really helps and that definitely helped me in becoming me and defining my truth,” she explained.

Towards the end of the interview, Michelle Obama gave one last piece of advice to young people around the world.

“I want young people to practice embracing the new because I don’t want them to ever feel stuck in their lives, you know?” she concluded.

We stan these two icons being inspirational, strong and simply the best.

Watch the full interview below!