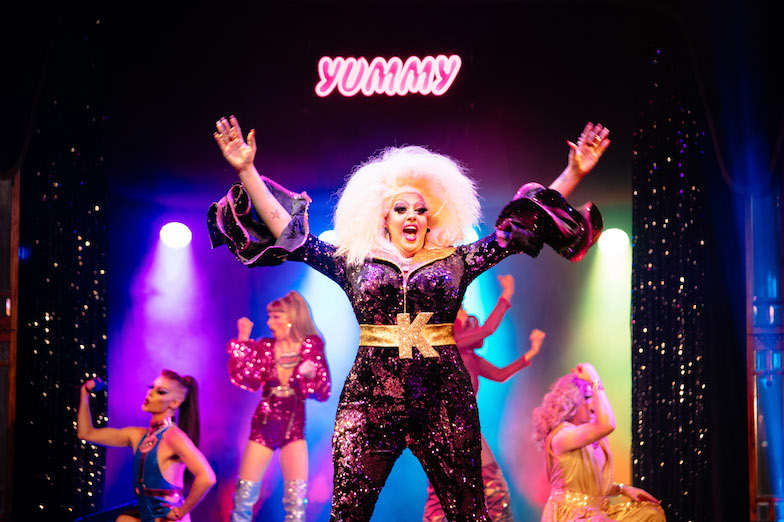 Cabaret outfit Yummy have made their London debut at the Underbelly Festival in a show directed by James Welsby.

Yummy brings together a renowned ensemble of drag queens, circus and burlesque performers in a fast-paced, one-hour show. Hosted by Karen From Finance, the premier corporate-office queen of Australia, it sees seven talented performers sing, dance and lip sync their way through a variety of songs for the assembled crowd.

While the show is undoubtedly entertaining, it is unfortunately just a bit tame and predictable for a cabaret night. There was a time when a performance like this would have been considered dangerous, exciting, challenging, subversive – but now that drag is increasingly mainstream, productions have to go that bit further to push the boundaries and keep us interested. There isn’t really anything in Yummy that we haven’t seen before – it plays everything far too safe.

That’s not to say it didn’t have its moments. Karen From Finance mimed an amusing rendition of Vanessa Carlton’s A Thousand Miles, complete with a sparkly keyboard which descended from the ceiling; Hannie Helsden impressed with a hula hoop routine, at one point briefly resembling a human slinky; and Jandruze delivered some deliciously entertaining choreography to the tune of Sandwiches by Detroit Grand Pubahs (although admittedly much of the humour was derived from the song itself).

It’s just a shame more of the show wasn’t like this – many of the performances weren’t as exciting or engaging. We felt like a lot of the routines only had one gimmick, and didn’t really progress anywhere. We weren’t entirely convinced that it held together conceptually, either – Joni in the Moon delivered some haunting live vocals, but this didn’t seem a natural fit in the context of a show where all the other performers were lip syncing.

Yummy is far from a disaster – in fact it’s a perfectly entertaining evening of cabaret and we enjoyed our night in the Spiegeltent. Everything just felt a bit on the tame side for our liking – it could have pushed the envelope much further on numerous occasions, and we felt it would have been a much better show if it had done so.