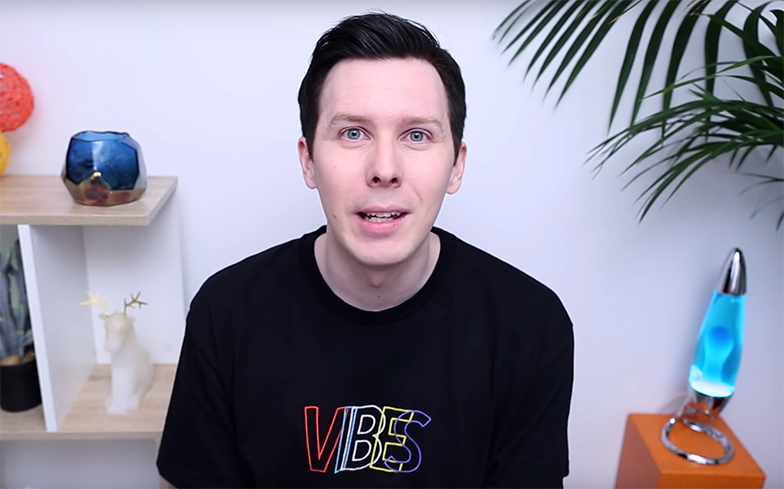 Phil Lester has opened up about his sexuality for the first time.

The British Youtuber and radio personality from Lancashire, England, addressed fans on Twitter with a video titled, “Coming Out To You”, alongside the caption: “I felt it was time to share this as hopefully my story will help!”

In the seven-minute video, the comedian – who boasts nearly 4.2 million subscribers – came out as gay and reminisced about his childhood whilst advising struggling queer fans on how to deal with their sexuality.

“There is something quite big I’ve been meaning to tell you guys,” he said. “I’m gay, and depending on who you are, you might’ve known, or it could’ve been a surprise… surprise! That’s how I should’ve come out to my parents.

“Even if you don’t totally relate to my story, you might learn something or change your view, or just feel like you’re not alone with something you went through. I’m gay! It’s great! I’m happy!”

Phil added: “And hopefully you’re happy for me too. If not, I hope you have a think about why you want a fellow human to be unhappy. And not true to who they are. And if that is a healthy mindset to have.”

His announcement comes just weeks after his comedy partner, Daniel Howell, a 28-year-old YouTuber and BBC radio presenter from London, came out via a 45-minute YouTube video to his 6.5 million subscribers.

In the clip, Daniel referred to Phil as his soulmate and said: “Queer people exist. Choosing not to accept them is not an option. To anyone watching this that isn’t out, it’s OK. You’re OK.

“You were born this way. It’s right. And anyone that has a problem with it is wrong.”