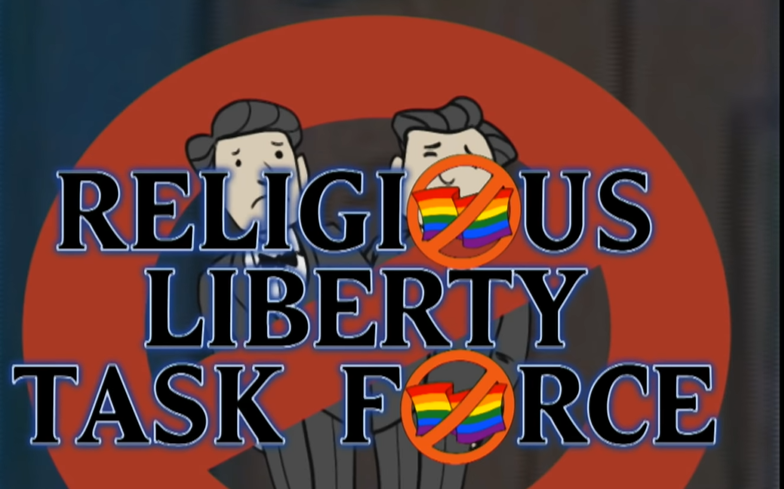 The task force was set up to help protect people’s right to religious freedom, in which it means that a businessowner won’t face consequences if they refuse to serve an LGBTQ person if it goes against their religious beliefs.

And now the ‘religious liberty task force’ has been… well taken to task in a hilarious new parody on The Late Show with Stephen Colbert. Aptly named the Faithbusters, the animated parody sees Jeff Sessions destroying things that threaten religious liberty, like same-sex wedding cakes.

The animated video also sees Sessions travelling around in the original Ghostbusters car, but instead of a ghost with a red cross through it, it’s a Pride flag.

The video, which also parodies the Ghostbusters theme song, contains lyrics like: “There’s a gay cake in your neighbourhood. Who you gonna call? Religious Liberty Task Force!

“On top of that cake, they’re both dudes. Who you gonna call? Religious Liberty Task Force!”

But even though the video is amusing, it highlights a horrific time that could be about to be inflicted on the LGBTQ community in America.

Sarah Warbelow, the Legal Director for the Human Rights Campaign said: “This taxpayer funded task force is yet another example of the Trump-Pence White House and Jeff Sessions sanctioning discrimination against LGBTQ people.

“Over the last 18 months, Donald Trump, Mike Pence and Jeff Sessions have engaged in a brazen campaign to erode and limit the rights of LGBTQ people in the name of religion.

“The Attorney General standing shoulder-to-shoulder this morning with anti-LGBTQ extremists tells you everything you need to know about what the announcement was really all about.”

And Rachel Laser, the president and CEO of Americans United, said: “This event by the Justice Department offends the true meaning of religious freedom.

“The event was clearly designed to advance the Trump administration’s twisted and dangerous view of religious freedom, one that uses religion to discriminate and harm others.

“This event exposed the administration’s real agenda: to preserve the power of Christian fundamentalists.”