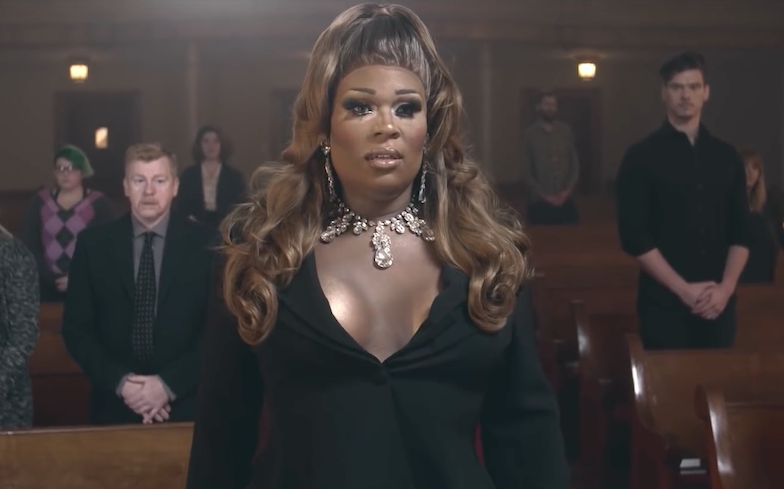 The Drag Race finalist – and Gay Times cover model – has delivered a stunning anthem for the transgender community.

Peppermint has released a fiercely powerful video for her transgender dance anthem, Blend.

The season nine finalist of RuPaul’s Drag Race teamed up with out rapper Cazwell for the track, and their forthcoming joint EP of the same name. It is due for release 9 March and will primarily consist of dance music.

As the video develops, Peppermint dons several sick’ning lewks and lit-er-ally takes us hennies to church, proclaiming: “My heart will transcend, and I’m never going to blend!”

In an interview with Billboard, Peppermint said: “We’ve practically been married to each other for years. We’ve worked and performed together since 2000. We also started a successful hip-hop class party in NYC at the Ritz and he was featured in my first music video.”

She added: “We wanted to do an EP that pulled from our club influences of house, pop and rap.”

Cazwell opened up about the inspiration for the EP, telling Billboard: “We wanted all of the songs to be very trans-positive and tell a story of what it is like being a trans woman in 2018.

Blend “was written from the state of mind of making a positive trans anthem. When you are a woman and especially a trans woman you are under a lot of pressure to blend in society so that no one calls you out for being trans. I wanted to write a song that proved the importance of not needing to blend into society to be happy with yourself.”

Earlier this year, Peppermint became the first trans woman to create a principal role on Broadway.

She is set to star in Head Over Heels, a new comedy/musical featuring songs from the iconic, all-female American rock band The Go-Go’s, known for their hits Vacation, We Got the Beat, Our Lips Are Sealed and Cool Jerk. The play – inspired by Philip Sidney’s 16th-century drama Arcadia – will also include hits such as Mad About You and Heaven Is a Place on Earth by Belinda Carlisle.

Michael Mayer’s production will first show at San Francisco’s Curran on 10 April until 6 May, and will then make its Broadway debut at the Hudson Theatre on 23 June, before it’s opening night on 26 July.

For our February issue, Peppermint became the first trans woman ever to appear on the cover of Gay Times.

In an exclusive interview, she opened up about being the first trans Drag Race contestant to be vocal about her status. She said: “It was a lot of personal pressure but I knew that there was an opportunity for people to connect with my story.

“I was cautious because I didn’t know if they’d accept an out trans queen and was worried I’d be rejected before I had the opportunity to speak about my experience on such a huge platform.”

You can purchase Peppermint’s cover for our February issue here.