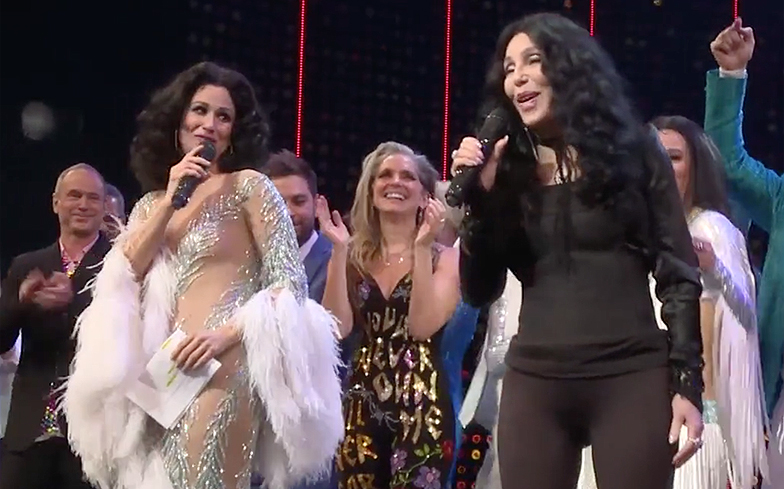 Cher gave a surprise performance at her own Broadway musical.

The Cher Show, a new musical that documents the life of the pop culture legend, opened on 3 December at the Neil Simon Theatre and drew a star-studded crowd, including Kim Kardashian West, Kanye West, Christine Baranski and Adam Rippon.

But it was an appearance from Cher herself that got everyone talking, as the music superstar appeared on stage for the curtain call to perform If I Could Turn Back Time with Stephanie J Block, one of three actresses who portrays Cher in the play.

We never thought we’d see Cher duet with herself, but we are so here for it.

Watch a clip of the moment below.

After starring in Mamma Mia! Here We Go Again this year, the American icon released an ABBA tribute album (Dancing Queen), which received universal acclaim from fans and critics and became her highest debut sales week for an album in the United States.

It contained covers of classic ABBA hits such as Dancing Queen, Gimme! Gimme! Gimme! (A Man After Midnight), The Name of the Game, SOS, Waterloo and The Winner Takes It All.

Now, the pop queen has teased the release of another album of ABBA covers, with a tweet of her dream tracklist.

The songs she wants to include are as follows: Take a Chance On Me, Super Trooper, Money Money Money, I Do I Do I Do, Honey Honey, I Have a Dream, Voulez-Vous, Does Your Mother Know and Rock Me.”