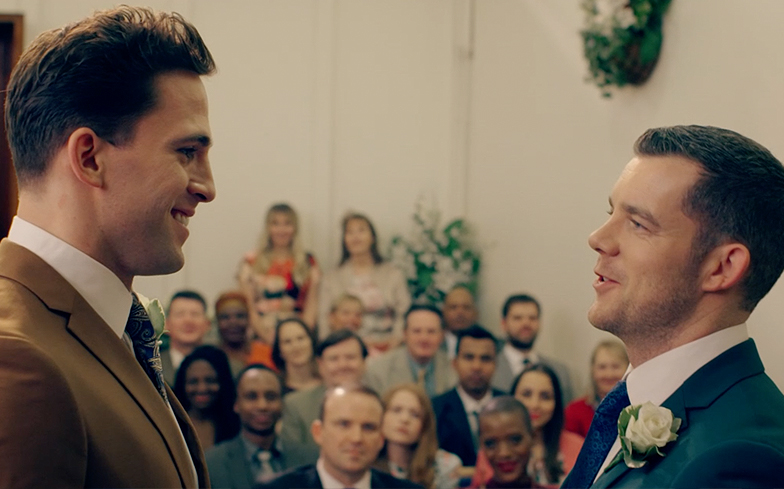 If like us you’ve been gripped by new BBC One drama Years and Years, you’ll have no doubt connected with the same-sex relationship that is at the centre of the primetime family drama.

Created by Russell T Davies, the six-part drama series follows the Lyons family over the next 15 years as we see a glimpse of the possible political and social chaos our world could fall into.

Dino Fetscher plays Ralph Cousins in the series who, when we are first introduced to him, is married to Daniel Lyons, played by Russell Tovey.

They are an everyday gay couple who get married and live together, placing what Dino describes as “vitally important” LGBTQ representation at the heart of the show.

“The thing that Russell [T Davies] has done so amazingly is that it’s not a show that is focussed around a gay relationship,” Dino tells us when visiting the GAY TIMES and Hunter VVIP area at Mighty Hoopla over the weekend.

“Daniel just so happens to be gay and was married to a man, and then he meets someone else. Obviously the Viktor storyline and the immigration is based with what is happening with gay rights [abroad], but it’s important to represent people who are just gay.

He adds: “[It used to be] just about coming out or dying as a result of HIV/AIDS or drugs, but now we’re at a point in our society where people are just gay and we should be represented with other storylines.

“[Sexuality] is just a factor of who we are, instead of making it about focussing on all the negatives and the struggles.”

Of course, if you’ve been watching the series so far you’ll know that tragedy strikes the gay characters in other ways in Years and Years. Stop reading now if you haven’t seen episode four…

Viewers were left stunned by the fourth episode when Daniel and his Ukrainian boyfriend Viktor Goraya attempted to cross the English Channel in a small boat over-loaded with refugees.

It shone a stark spotlight on the migrant crisis currently happening in the real world, and the victim here was Daniel as he lost his life trying to smuggle his partner back home.

Viktor was first deported after Ralph reports him to the authorities as revenge for Daniel cheating on him in the first place.

It’s a decision Dino defends, saying that he understands how the character would be left feeling emotionally distraught after being dumped by his husband.

When asked how he reacted as a viewer to the consequence of that action when the episodes aired, Dino says: “I think it’s horrific and you see it in the next episode.

“When something like that happens, it was never the intention. It was just a moment and the implications are horrific.”

It airs at 9pm on Tueaday on BBC One in the UK, and will start on HBO in the US on 24 June.