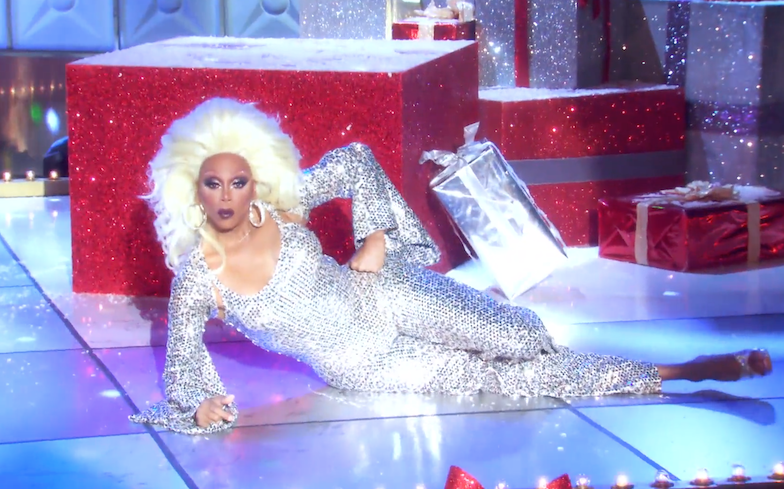 It’s taken 10 seasons, three All Stars and a Holi-Slay Spectacular for Mama Ru to showcase her sickening lip sync skills.

During the show’s highly-anticipated Christmas special, the Emmy Award winning host battled against her number one squirrel friend, Michelle Visage, to their holiday anthem Christmas Party.

The two twerk, perform the splits and multiple high kicks, and Ru channels her inner Aja with her very own “is she gonna jump from there?” moment. We have so much respect for them after that! Honestly! ‘Twas truly a sight to see! (Just watch it.)

The contestants – and Ru – perform several Christmas numbers before they hit the main stage to perform a lip sync number to RuPaul’s new track, Get To You, with several Pit Crew members.

Because the queens’ performances were so faaabulous (Michelle had no critiques – can you believe?), all eight girls had to lip-sync for Christmas in teams of two: Mayhem vs Sonique, Latrice vs Kim Chi, Shangela vs Jasmine and Trixie vs Eureka.

To see who wins the competition, head over to Netflix UK. For some reason, typing ‘Drag Race’ won’t find it, so you’ll have to search the whole title, ‘RuPaul’s Drag Race Holi-slay Spectacular.’

Next week, VH1 airs the much-anticipated fourth instalment of Drag Race All Stars 4.

The brand new trailer teases the “biggest, boldest move” in the show’s HERstory – watch below.