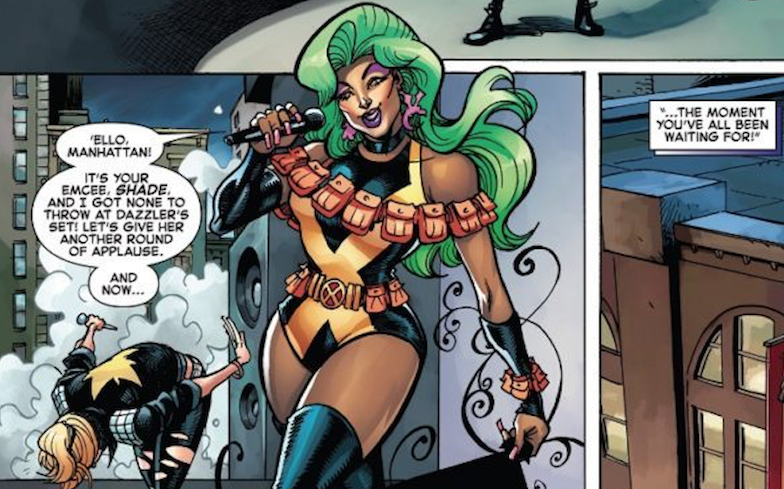 We’re gonna need to throw a ‘halleloo!’ up in here because Marvel Comics has just unveiled its first ever mutant drag queen, which means it’s about to get shady… OFFICIALLY.

Shade – yas, that’s her name – made her debut in the fourth issue of Iceman’s spin-off series, which was created by openly gay writer Sina Grace and artist Nathan Stockman.

Her powers involve teleportation and the rather fitting ability to open pocket voids that allow her to travel in and out of her handheld folding fan. Life! Has! Been! Given!

“I really wanted this series to push readers to new and better stories about the whole queer experience and how it applies to being both a mutant and a superhero,” Grace told The Advocate.

“There’s a million different queer perspectives and we’re only scratching the surface.”

Shade also appears in the fifth issue of Iceman (out today), and will also make an appearance in X-Men’s: Winter’s End, which will hit newsstands in February. In 2017, Iceman became the first hero to headline a Marvel comic book series as a gay lead – which received universal praise from the LGBTQ community.

The series focuses on the adult Bobby Drake coming to terms with his Omega-level superpowers, his life as an out gay man, all while battling some of the biggest and most powerful villains in the Marvel Universe.

However, the final issue of the X-Men Extermination series from Ed Brisson and Pepe Larraz has completely reversed Iceman’s character development, and put him straight back into the closet.

In the issue, the displaced X-Men are forced to return to their former time period, and to protect the timeline, their memories were wiped, which means Bobby will have no memory of coming to terms with his sexuality.

In the issue, the younger Bobby told his older counterpart: “I’m not the same person. don’t want to go back to pretending I’m something I’m not,” to which he responds: “If you hadn’t come here and been able to embrace who you really are, then I’d still be living a lie too.

“So, no matter what happens when you go back, you finally let me be honest with myself. And no one can take that from us.”

Related: Iceman and Pyro hook up in new issue of X-Men: Gold comic.