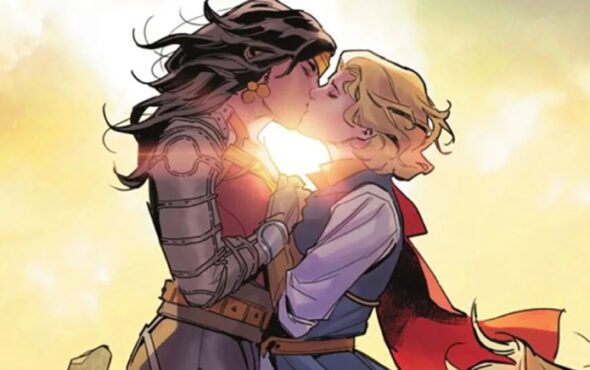 Back in November, DC Comics released the first issue of their critically-acclaimed new comic Dark Knights of Steel.

The series also introduces an array of new characters including Superman’s sister Zala-El.

In the second issue, Lois Lane informs Princess Zala-El that her father has been murdered.

Stricken with grief, Zala-El finds comfort in the arms of Wonder Woman, which results in the two sharing a romantic kiss.

Before the release of this landmark storyline, fans have always speculated that Diana of Themyscira was part of the LGBTQ+ community.

In a 2016 interview with Screenrant, DC comic writer Greg Rucka put the rumours to rest when he confirmed the infamous hero was indeed queer.

“Yes. I think it’s more complicated though. This is inherently the problem with Diana: we’ve had a long history of people — for a variety of reasons, including sometimes pure titillation, which I think is the worst reason — say, “Ooo. Look. It’s the Amazons. They’re gay,” he said.

“And when you start to think about giving the concept of Themyscira its due, the answer is, “How can they not all be in same-sex relationships?” Right? It makes no logical sense otherwise.

“Now, are we saying Diana has been in love and had relationships with other women? As Nicola and I approach it, the answer is obviously yes.”

With the third issue coming out on 4 January, we can only hope that readers will be treated to more Diana/Zala-El content.

Aside from Wonder Woman’s confirmed queerness, DC Comics has given LGBTQ+ fans massive amounts of queer representation throughout 2021.

Back in August, Robin aka Tim Drake was introduced as bisexual in Batman: Urban Legends.

Jon Kent, who recently took on the Superman mantle, came out as bisexual in his new series, Superman: Son of Kal-El.

Writers also introduced a trans Amazon in one of the latest issues of Nubia & The Amazons.

At the time of her initial introduction, Yeoh was one of the first major transgender characters to be featured in a mainstream comic book.

We are loving all of this LGBTQ+ excellence in the DC world.