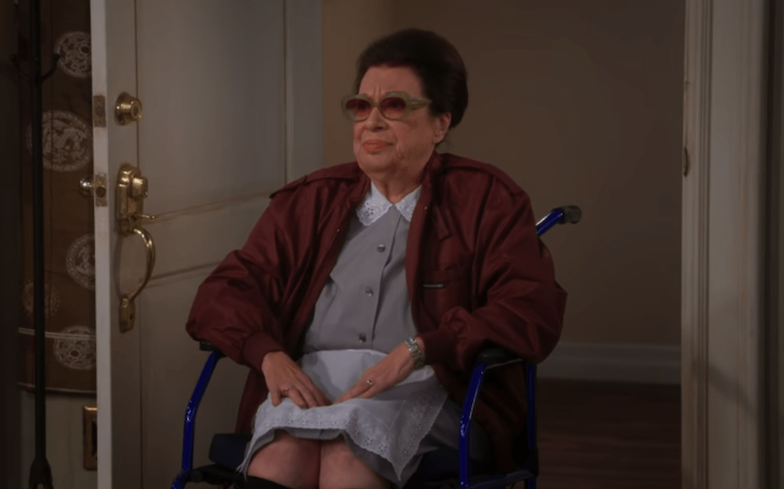 Morrison played Rosario Salazar in the original run of the NBC sitcom from 1999 to 2006.

Shelley Morrison has passed away at age 83.

The American actress was best known for her role as Rosario Salazar, Karen Walker’s cranky El Salvadoran maid on the beloved NBC series Will & Grace. She was a semi-regular character for the show’s original eight season run from 1999-2006.

Morrison’s died from heart failure at Cedars-Sinai Medical Center in Los Angeles after a brief illness.

According to a statement released following her death, Morrison recently said of her Will & Grace character: “She reminds me a lot of my own mother, who loved animals and children, but she would not suffer fools.

“It is very significant to me that we were able to show an older Hispanic woman who is bright, smart and can hold her own.”

Will & Grace’s co-creator claimed in 2017 that Morrison was asked to come back for the revival but had declined, telling him that she had retired. Her character was written out in Rosario’s Quinceañera, in which she dies from a heart attack off-screen.

Debra Messing, who plays Grace on the sitcom, paid tribute to Morrison after her death, writing: “Oh, Shelley… what a loss. Our dear Rosario has passed on. Shelley had a career that spanned decades, but she will always be our dear Rosie.”

Eric McCormack (Will), said Morrison was a “beautiful soul” whose work was “as nuanced and real as it was hysterical”.

Megan Mullally, who played Rosario’s boss Karen, tweeted: “My heart is heavy. putting shelley, her beloved husband walter & their children in the light. thank you for your friendship & partnership, shell.

“you accomplished wonderful things in this world. you will be missed.”

Morrison’s husband, Walter Dominguez, said her “greatest pride” was playing a character in a “series that furthered the cause of social equity and fairness for LGBTQ people” and she believed the best way to change perceptions was “through comedy”.

Related: Gus Kenworthy to guest star in final season of Will & Grace.