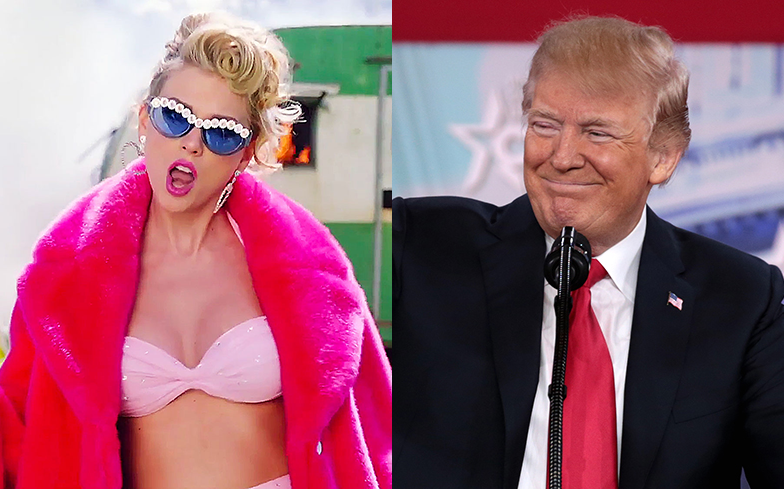 “The Trump administration absolutely opposes discrimination of any kind and supports the equal treatment of all.”

The White House have released a statement in response to Taylor Swift’s shady remarks towards the Trump administration.

Earlier this week, the American singer-songwriter won the coveted award for Best Music Video at the ceremony for her controversial visual for You Need to Calm Down, the second single from her critically-acclaimed seventh studio album Lover.

The video starred numerous queer icons such as RuPaul, Ellen DeGeneres, the Fab Five, Billy Porter, Hayley Kiyoko and Adam Lambert, and ended with the star urging fans to sign her petition for Senate support of the Equality Act on change.org.

Taylor accepted the award alongside her best friend and choreographer for the video, Todrick Hall, as well as Drag Race stars such as Tatianna, A’keria C. Davenport and Jade Jolie, who performed the song with her earlier in the night.

“In this video, several points were made, so you voting for this video means that you want a world where we’re all treated equally, regardless of who we love or how we identify,” she said to a cheering audience.

“At the end of this video, there was a petition, and there still is a petition, for the Equality Act which basically just says that we deserve equal rights under the law. I wanna thank everyone who signed that petition.”

She then shaded Tr*mp and his administration because of their lack of recognition for the petition by saying: “It now has half a million signatures, which is five times the amount it would need to warrant a response from the White House.”

Now, the White House have actually responded, and it’s pretty much a rehash of the statement that was shared with NBC News earlier this year after the House of Representatives passed the Equality Act.

“The Trump administration absolutely opposes discrimination of any kind and supports the equal treatment of all,” said White House deputy press secretary Judd Deere. “However, the House-passed bill in its current form is filled with poison pills that threaten to undermine parental and conscience rights.”

Last month, Taylor said – in a conversation with Vogue – that she hadn’t advocated for the LGBTQ community sooner because she “didn’t realise until recently that I could advocate for a community that I’m not a part of.”

Lover was released last week to universal praise and is projected to debut in the United States with over 800,000 copies; it includes songs such as ME!, You Need to Calm Down, Lover, The Archer and The Man.