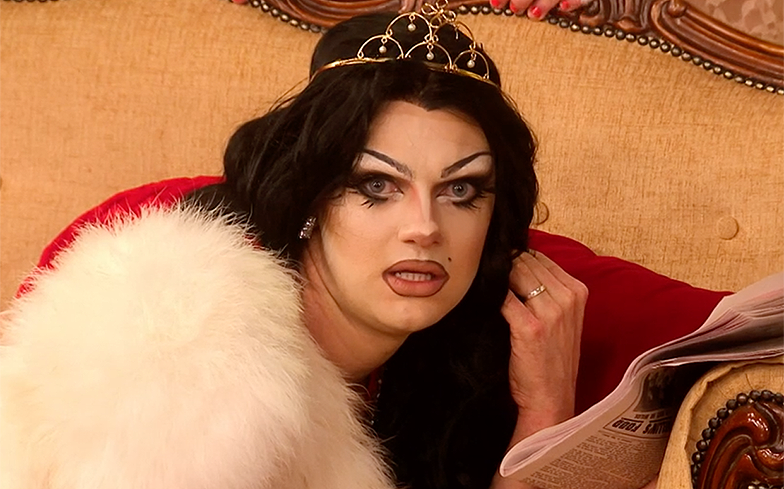 The Drag Race UK queens did not hold back on this week’s episode.

When Cheryl Hole told us to expect “drama and conflama” on Drag Race UK, we had no doubt in our minds that the dancing diva of Essex was telling the truth, the whole truth, and nothing but the mothertucking truth because duh, this is Britain. As audiences across the pond noticed last week, we’re crude, filthy as fuck and – like Baga Chipz eloguently put it – “gobshites”.

The conflama was in full effect again this week, but the drama… oh henny… intensified. To recap, last week’s premiere saw Gothy Kendoll’s elimination and initiation into the Drag Race UK Hall of Fame as Britain’s answer to Porchop after losing the first lip-sync showdown to Vinegar Strokes, which leaves the rest of the queens “kinda shook”.

Vinegar wastes no time wiping Gothy’s lipstick message from the mirror, expressing satisfaction at winning the show’s first ever lip-sync, which prompts an excited reaction from Cheryl. “I don’t know how long I’m going to be able to put up with this,” The Vivienne says in her confessional of Cheryl, meaning our first Drag Race UK ‘rivalry’ is underway…

Their potential future feud continues in the mini-challenge, in which The Vivienne is tasked with ranking each queen based on how much she’s threatened by them in the competition. Vinegar rules the roost while Cheryl and Scaredy Kat are picked last. Cheryl is fuming, obviously. The Vivienne politely explains: “I’m putting her there for a reason, she never shuts up.”

Scaredy is thrilled to be considered “the weakest link” because she wants to be underestimated. (But will she be a Jinkx Monsoon or a Serena Cha Cha? Hmm.) RuPaul then reveals the twist: The Vivienne and Scaredy will compete as team captains in a sumptuous new costume comedy drama, Downton Draggy. Scaredy chooses Crystal, Cheryl, Divina De Campo, Crystal and Blu Hydrangea for her team, while The Vivienne picks Baga, Vinegar and Sum Ting Wong.

After they film their appearances for the future BAFTA-winning parody, the queens prepare for elimination day. Blu is told by Cheryl that her performance in the challenge was a “struggle”, which revives The Vivienne’s Academy Award-worthy Kim Woodburn impression as she fires across the room: “I think you’re a little bitch actually, a mean horrible little bitch.”

Poor Cheryl thinks she’s having a laff, but it’s clear The Vivienne isn’t too fond of her. “Just fucking chill out, can’t wait to see the back of her. She’s being overdramatic over everything,” she adds. The Vivienne airs her opinion on Cheryl to Crystal, who somewhat agrees, but explains that her over-the-top persona is how she actually comes across off-camera.

The drama and conflama takes a pause while Vinegar and Scaredy discuss their coming out journeys. Scaredy says her sexuality “is my girlfriend” and isn’t interested in being with anyone else, which Vinegar ‘envies’ as an older queer person, especially as a queer person of colour who hails from the Caribbean. “You think homophobia is bad here, but over there it’s a different level,” she explains.

Their conversation prompts Sum Ting to reveal that her parents are unaware of her chosen career. “I think it’s a cultural thing,” she tells them. “It’s just a little bit different being first-generation Chinese. I was about 12-years-old when I told my dad was gay and he didn’t acknowledge it, so we haven’t brought it up since… I don’t want to throw it in their face like, ‘Ahh, you’ve got a gay son.'”

Sum Ting’s family don’t know she’s on the show and still think she works as a marketing executive in London. On a more heartbreaking note, they don’t even know that she’s living with her partner of five years. “Having that side of myself completely cut away from my mum and dad feels like I’m not letting them enjoy my successes as well,” she continues. Since the show premiered last week, we’ve heard nothing but “slag”, “gobshite” and “tuppence” – and we won’t lie, that’s a very accurate representation of people in the UK – but this encounter was the first heartwarming moment we’ve seen from the queens. More of this please!

While the bottom team are being judged, the safe queens discuss Cheryl. “I’m having an issue with Cheryl’s vibe at the moment,” admits Vinegar. “I feel like she’s bringing Alyssa Edwards and Gemma Collins into the room, but I’m not seeing Cheryl Hole. I don’t know who he or she is.” It’s becoming apparent that Cheryl is receiving the Laganja Estranja treatment this season.

Awkwardly, Cheryl then enters the room and is immediately questioned on her ‘lack’ of authenticity. “To be honest, I do feel really overwhelmed being here,” she opens up. “Yeah I play up. We’re all human, but when we’re in drag, it’s that element of stepping yourself up. I knew I was not being myself… like I am right now, because I was too scared to let my guard down.”

The moment soon ends because there’s an elimination looming. When the queens ruturn to the main stage, Mama Ru announces Scaredy and Blu as the bottom two contestants, and the two battle it out to Bananarama’s iconic dance classic, Venus. Scaredy channels her inner Tammie Brown for the performance (her first ever), while Blu serves Bond Girl on acid, securing another week in the competition.

So, what did you think of the drama and conflama on this week’s episode? Did Baga deserve the win? Is Cheryl being genuine? Do we actually use the word ‘tuppence’ in 2019? Let us know ya thoughts and remember to be nice. Don’t be an arsewipe.

Related: Here’s when you can expect Snatch Game on RuPaul’s Drag Race UK.