We caught up with Layton Williams during rehearsals for Hope Mill Theatre’s new production of Hushabye Mountain. 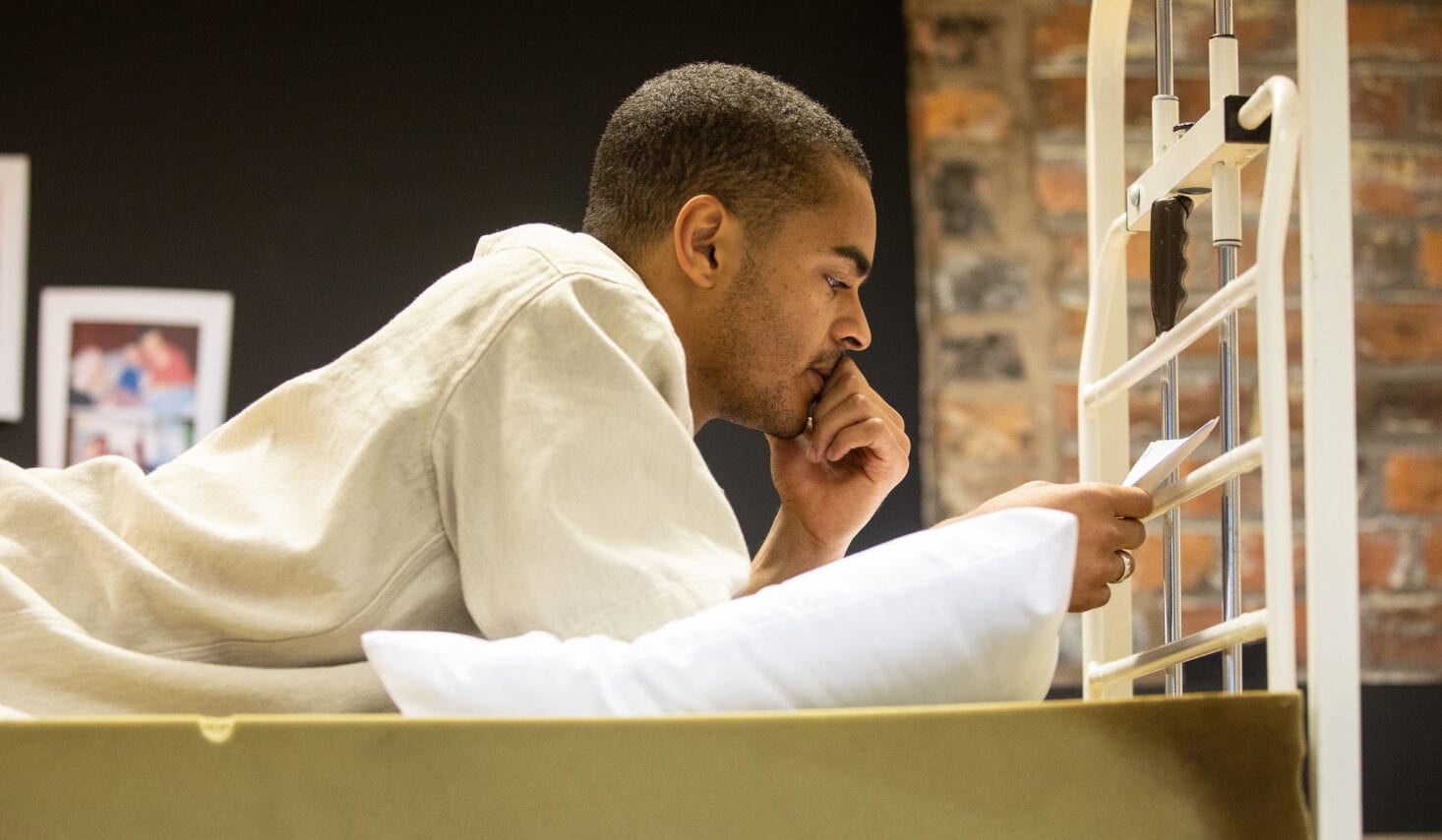 It tells the story of a world that is adapting to live with HIV. In the new normal where we’re learning to live with Covid, and in the wake of Russell T Davies’ incredible hit show It’s A Sin, it feels like a very timely revival. We thought we’d check in with star of the show Layton Williams to find out what it was all about.

We absolutely adored Layton as the titular Jamie in hit West End musical Everybody’s Talking About Jamie, and we’re excited that he’s returning to that show when it tours later this year. Before that, Layton will be appearing in Hushabye Mountain with Olivier Award-winner Matt Henry (who played iconic drag queen Lola in the West End production of Kinky Boots) and Jodie Prenger (A Taste of Honey). We caught up with Layton for a quick chat during rehearsals to learn more about the show…

Hi Layton! How are rehearsals going?
Listen, it is going good! It’s my second day back at rehearsals, I was away last week so the brain’s a little bit at overload, but I can tell it’s gonna be so beautiful. We just did a really beautiful scene, emotions are high, you know? It’s really going quite amazing.

Some of our readers may not be familiar with Hushabye Mountain. Can you tell us a bit about the show?
Yeah of course! Hushabye Mountain is a play by Jonathan Harvey who I had the pleasure of working with when I was a kid, I did my first ever TV show with him and now I get to do my first play with him which is amazing. It shines a spotlight on the AIDS pandemic in London and it circulates around the characters Danny, who passes away, and I play his boyfriend Connor. It’s about love, it’s about loss, but of course with Jonathan Harvey there’s lots of laughs thrown in because it’s Jonathan and he’s hysterical.

One scene we’re having a good old giggle, the next minute we’re dealing with these really touching topics. It’s showing how people navigate through that difficult time. You know, AIDS was basically a death sentence, and people were so scared, but they had to crack on, they had to live. Love, loss, all things in-between, friendship… there’s really beautiful friendships in this as well. And family! Matt Henry, playing my older brother, some really beautiful moments with that cos he’s best friends with my lover. It’s really all about that and how we navigate through some difficult times.

It’s so nice to be back in Manchester, because I’m from Bury, in Greater Manchester. Hope Mill Theatre have just been doing such incredible work over the years, I’m so pleased to finally be working with them, and the great thing about this is, you know it’s happening! No matter what! The show will go on and we won’t even have an audience, it’s just streamed. We get to have an artistic license on it in the sense that we can be more creative with the space, the cameras will follow us, it’s new but that’s what lockdown’s got us doing so you know, why not!

We’ve heard lots of good things about the Hope Mill Theatre – can you tell about your experience of working there, and with their team?
They’ve been doing some really great work and the team are just so fabulous! They’ve been working on, not the biggest of budgets, but what they’re creating is so thoughtful about each moment and how it’s going to tell the story, I hope it really shows on camera. It’s a great team here at the Hope Mill.

Can you tell us a bit more about your character, Connor, and what attracted you to the role?
Connor is navigating this horrendous situation; nobody really expects to lose their partner and then I guess when you do lose your partner, what are the rules with that? Do you move on? Can you move on? I think there’s a lot of built up frustration in Connor, my god, I don’t think I’ve ever played somebody that’s got so much angst and frustration, there’s a lot bottled up in there. When I first saw the part, if I’m gonna be honest, I was like can I do it?! I did think it’s very different to what I’m doing and as Gay Times readers will know, all of us are not the same people, just because we’re playing queer roles doesn’t mean that the characters, all their lives are the same. This was quite a different vibe for me but that’s what drew me to it.

We stand on the shoulders of people that were brave, were fighting, were marching, were looking for answers during this time. I think when we share these stories we light a candle for those who were lost, that we can just keep the memories alive. We’re lucky to live in a world where we can live freely and openly and hopefully without stigma, and people like Billy Porter, speaking up and being out and proud about their status because it’s not a death sentence any more. For me, it’s nice to go back and explore that and be appreciative of where we’ve come. 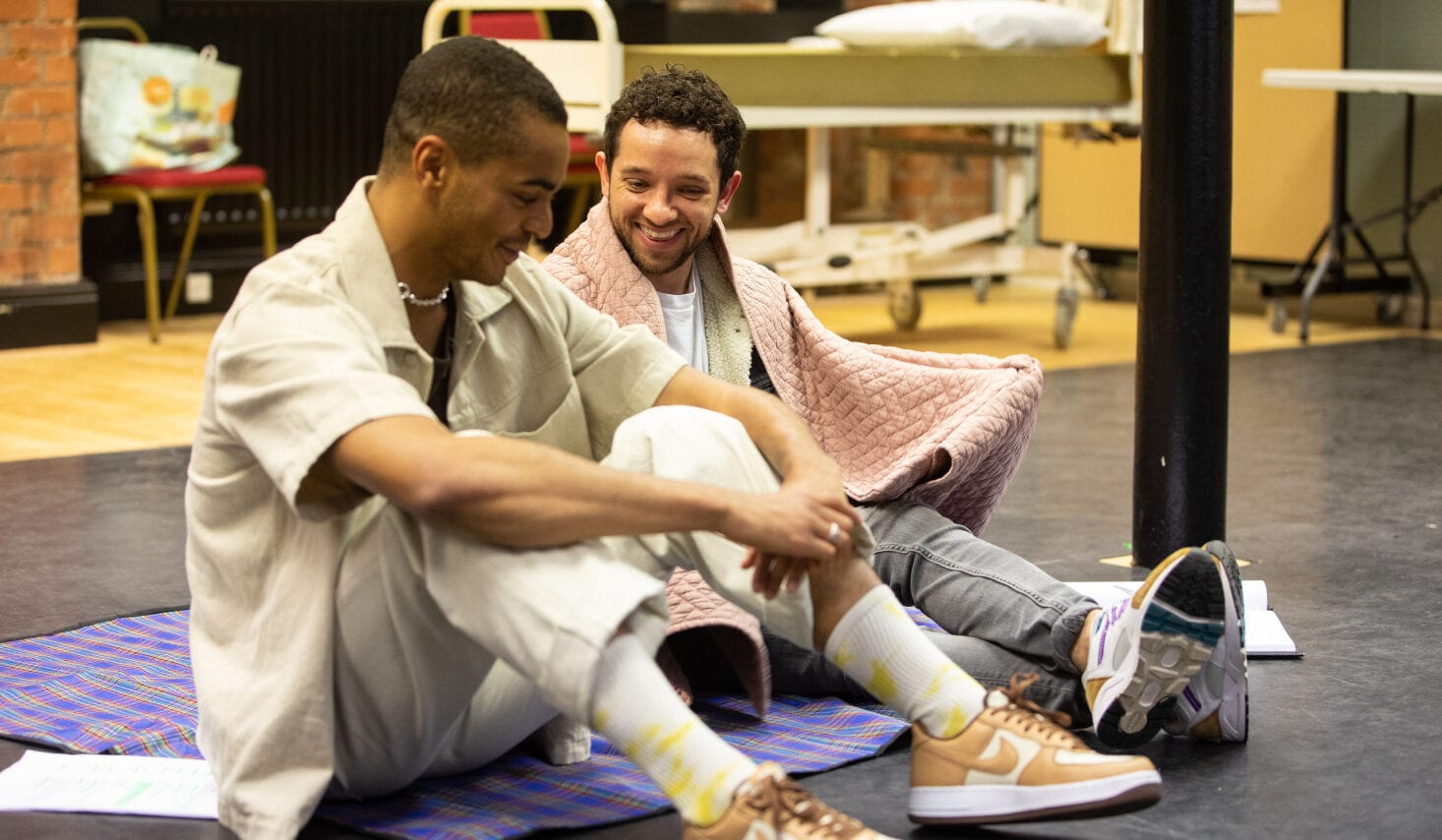 You have some big-name co-stars – what’s the dynamic like working with such a talented cast?
It’s so good, because everyone around you is so good and it makes you wanna be good! It lifts you up. Last week I was away so I had to have a whole week off rehearsals. Coming back these last couple of days, everyone’s just guiding each other through with so much patience. You feel safe because people are here because they’re good! They’ve done their shit! They did their time! Paid their dues! Snatched trophies! It’s amazing to work there, even the little trinkets of stories you hear about the past, everyone’s had very different career paths and now they’ve got into this. The cast, and the creatives and the crew as well, they’re just a dream to be honest.

As a young actor, and a Black actor, and a gay actor, what does it mean to you to see more diversity, more representation on the stage? And for you to be part of this increasing visibility?
Well, it’s everything, isn’t it? When you see yourself represented, when you see yourself in things it makes you dream big and think, if they can do it, then I can do it. I feel really proud of being that person for many, but I also love seeing it and being inspired myself. With shows like It’s A Sin, my really good friend Omari Douglas, we were literally… I was first cover in Hairspray, in my first musical theatre tour as an adult, he was second cover, we were in ensembles, working hard and look at him now! Up there, shining. I’m doing this, we’re doing that, and it’s just like… we, hopefully, are becoming them people that can show, and then we also look ahead to the Billy Porters… I think it comes full circle. But with representation, more is more is more! I want more, I want to see more, and really happy to be doing it as well.

One great thing about Jamie, they just said to me, we didn’t really look at the colour of your skin, it was just a given that you were gonna be Jamie and everything else kinda worked around it. I think they’ve done the same with this play, like, I don’t know if Connor in the original production was black but why does it matter? Me and Matt Henry can come through and give you the story. I think it’s good, I think we’re stepping in the right direction, people are starting to really question their casting when you’re going to put a poster up with five leads who are all white. Does anybody think, hmmm, where we live right now in this world, so many beautiful people out there, can we not get someone in to show a different journey? I love it, I’m all for it, and I think they should keep doing and give some more.

I’m constantly messaging my friends how proud I am of them, for representing black people, for queer people. My best friend John McCrea playing an out gay character in Cruella, it’s just like, wow! My friends are so inspiring because if they’re doing it then I can do it too, you know? We lift each other up, support each other, keep killing the game.

You mentioned Jamie – how excited are you to be returning to that role later this year?
I’m really buzzing! I have some unfinished business for sure, it’s a huge part of my life. It’s a show that just makes people smile, it opens people’s hearts, and it’s a show that directly talks to queer kids in the UK now – and even more amazingly, regional kids. This show is set in Sheffield, it’s not set in London. The great thing about going on tour, we’re taking this to kids that might not be able to see the show in London, so it’s gonna have more of an impact and I’m excited for that.

Hushabye Mountain will stream live on 5 June with further streamed performances available throughout June. More information can be found here. 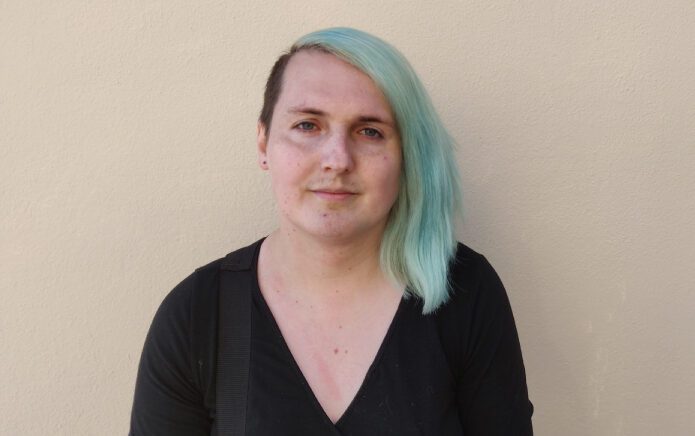 Philip Baldwin speaks with Laura Kate Dale about the importance of Disability Pride Month and their experiences as an autistic trans woman.