What, or who, is Dragpunk? 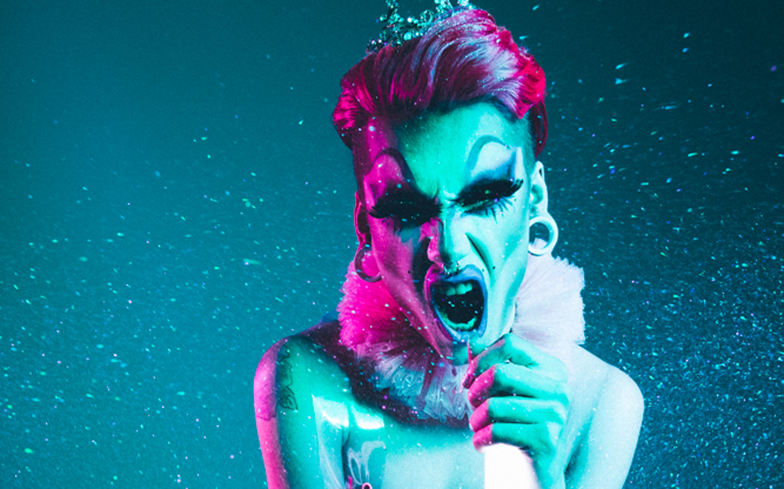 Dragpunk: a new queer art collective based in Birmingham.

Its members are all performance artists of one kind or another, identifying as drag queens, genderfucks, and club kids. Across the collective, its members have expertise in: makeup art, body art, fine art, teaching, acting, singing, photography, graphic design, and illustration.

Biologically, some are male, and some are female, and they often prefer to use ‘they’ as a pronoun, rather than ‘he’ or ‘she’. Like most groups of this kind, there is huge professional and personal support between its members. What makes Dragpunk more special is its interest in collaborating to host events, like workshops and film screenings, for the wider community in the city.

Paul Aleksandr, a founding member, moved to Birmingham several years ago to study Russian at university. Having lived in several different places before then, Paul isn’t particularly rooted anywhere, but chooses to live in Birmingham because, like much of the Midlands and North, “It’s finally blossoming whilst the surrounding post-industrial areas decline ever more so;” a juxtaposition he finds hard to ignore. It’s also accessible by nearly every Megabus.

Paul uses the same name in and out of drag. “I feel no different smeared in paint, in drag, than I do out of it; my drag is neither a mask nor outlet for an alter ego.” By day, a bookseller at one of the country’s biggest chains. It’s a job they enjoy. Like drag, books are a minority pastime, and, much like performance art, peddling books is a job that attracts somewhat leftfield people. “I maintain the collective noun for booksellers ought to be a ‘cynic’ of booksellers. And that is a basis for my attitude and so for my drag.”

In addition to all this, Paul also does scare acting. “Any chance to be creepy, and to expose and live the dark side to life, feels very natural and exciting to me.”

For Paul, drag is an extension of art, and that art is subjective and personal. Birmingham’s current grassroots drag scene is very young. Paul says it came about around two and a half years ago, describing it as a gathering of people from different places, ages, genders, sexualities, and queernesses. This was Paul’s chance to explore and experiment. Initially, they were reluctant to refer to what they do as drag, preferring genderfuck, or simply describing themself as a clubkid. “Once people started commenting on my looks using the name ‘drag’ I started to replicate the name for ease.”

Paul states, “50% of a look is aesthetic, 50% is attitude.” The aesthetic is dark, provocative, and always playing with gender. However, there’s something knowingly raw about it too. They appreciate evolution, both within themself and in how drag changes within a society they feels doesn’t emphasise patience and learning. “The things I maintain keep me interested in drag are: drag is politics, drag is art, drag is queer, drag is a personal journey.”

As for attitude, Paul emphasises positive confidence, warmth, inclusivity, humour, and embracing the absurd: all things he feels LGBTQ communities and the world need.

Lilith, like Paul, also came to Birmingham for university, currently studying illustration. Looking for independence, the attraction to Birmingham came from its status as the second city. Maybe because Lilith comes from the South, Birmingham seems a friendly place.

She feels a strong sense of community within the queer arts scene during events here, like they’re included in it all. “The queer arts in Birmingham have been developing a lot more recently. On the gay scene there hasn’t really been any venue for it but this is changing now with various groups of people making cool queer things happen.” Having a background in design unsurprisingly feeds into the rest of their art, with both the aesthetic and performance bringing together gothic and emo elements.

They had only recently started drag when the opportunity to join Dragpunk came about. For Lilith, this meant the chance to develop the performance side of drag. “We are always pushing each other and developing looks and ideas together. It’s great being able to work with your closest friends to create events and performances.”

As well as working alongside close friends, Lilith joined Dragpunk with, boyfriend, Tacky.

Tacky’s drag is, well, kind of tacky. With overdrawn lips, pink eyelashes that look like the wings of a small bird, and hair the colour and shape of cotton candy, Tacky isn’t trying to look like a real anything, let alone a girl. Anime is clearly a huge influence, but the goal of the look and any performance is comedy.

By day, Tacky is a primary school teacher. As much as Tacky loves the job, what drag offers, is the platform to act, to joke, and be irreverent in a way that most traditional primary schools wouldn’t allow. “I love crazy, comedy drag. The scene in Birmingham is growing, and to be a part of that growth is really super.”

A Birmingham native, Tacky left home, like Paul and Lilith, for university only to return afterwards so they could be where they’re happiest: reunited with family, friends, and the drag scene. “I think there’s a drastic movement and change in a lot of cities, but, and I may be biased, I believe Birmingham’s change is the most significant.”

To Tacky’s knowledge, queer arts and performance spaces, along with any clubkid movement, were either practically non-existent or lived underground only a few years ago. But now it’s in full bloom. There are new spaces where drag artists can perform, and established nightclubs, like Nightingales, are putting on more and more drag nights, catering for different styles. “It’s really rejuvenated the scene by noticing what the queers want, which is great.”

But what does Tacky bring to Dragpunk beyond comedy and tackiness? “Every group need the funny friend who’s not as pretty but everyone loves: the DUFF,” (DUFF = Designated Ugly Fat Friend), “I’m the DUFF.”

Another Birmingham native is Amber Cadaverous. Amber is, to the interest of many people, a female drag queen, meaning that, by day, Amber identifies as a woman.

It’s interesting to me that women calling themselves drag queens causes so much controversy. Drag is, at its root, about the mocking of identity and the concept of gender. It therefore seems a little strange that so many people who enjoy this art form because of the way it makes fun of gender roles are so preoccupied with the biological sex of whoever is on stage.

“I would love for lady queens to get more exposure and to be able to represent for the non traditional kinds of drag, especially the women in the industry!”

Out of drag, Amber is an artist, predominantly a painter, who studies Fine Art at university. This is most visible on the occasions when Amber’s make-up incorporates intricate designs in addition to the traditional elements of contouring and highlights.

Contouring may not seem necessary for a women doing drag, but that isn’t the point. Dragpunk, as a collective, has a lot of genderfuck in it, and part of that is emphasising your own gender. For ‘bio-queens’ rejecting the oppressive elements of masculinity through embracing femininity goes far beyond whatever sex they were assigned at birth.

Amber says she couldn’t imagine doing what she does anywhere else. “Birmingham is brimming with art and creativity that needs an outlet and voice. I feel it doesn’t have the performance space for the growing interest in drag, club kids and expressive makeup and dressing up. The outlets are finally now being created, and it’s happening quite organically. The modern drag and art scene as we know it didn’t exist here 5 years ago.”

In terms of art, Amber attributes this to the Birmingham School of Art churning out various people who have made art spaces in places like Digbeth. At the same time, numerous creative and local drag queens have nurtured the queer scene’s growth, which has now culminated in several regular club nights in the heart of the city.

Dragpunk brings these two worlds together. “It’s an art collective of creative queer-minded people: a living art aesthetic, bringing together queer creatives, to release their self-expression and inject more queerness into wider society via art projects and activism.”

For Jenna Davinci, the intersection of arts and queerness is a big part of the appeal of drag. They grew up in Cannock, a small town outside of Birmingham. “I moved to Birmingham when I first discovered the gay and drag scene here, I just found the whole drag lifestyle so magical and made friends through it.”

They see Birmingham as an excellent place for the arts. “The scene itself is getting bigger and bigger and even with drag, more art forms are being incorporated and the art scene is getting more respected and more popular.”

Jenna, a hair stylist and make-up artist, has an incredibly varied style of drag, from full beauty drag to quirkier concept costumes. “Where my strengths lie is that I’m a performer and performance ideas and club nights are something that come to me relatively easily.”

But what were the motivations for a queer drag movement like this? They were all friends first, but Paul explains they all eventually formed Dragpunk as a place to support each other specifically with drag and performance. They hope to fight the internal and external homophobia, transphobia, and bullying attitudes that exist and go unquestioned. “Whether safe space film evenings or fun themed performance nights, there’s so much scope and room to bring more and more people into the fold to express themselves and embrace the queer.”

Jenna adds, “I helped create Dragpunk in the early stages, and it’s always felt right, because together we are a family. Like many queer people, to me, my friends are my family.”

Amber says, “My main motivation behind this is to create the safe queer spaces that I wish I could’ve had gone to when I first got into drag at 16, as well as to have a space where drag and art can crossover.” Most drag events are either 18+, in a nightclub setting, or both. With RuPaul’s Drag Race making drag part of mainstream gay culture, there is an entire generation of queer kids intrigued by drag with too few spaces to experience it. “It is my goal with Dragpunk to be able to host drag and art workshops and displays by day for younger and older people alike. Whether the interest is makeup, performance art, drag art, queer politics, or you’re simply in need of a safe space for self-expression, we want to provide this.”

Although the group is young and still in the process of making a name for itself, there has already been a positive reaction, both in Birmingham and further afield. Their first film night was well received; local queens have supported them, and event organisers have been encouraging. Recently, at a Trixie Mattel show in Cardiff, Dragpunk were invited to perform too. “We made lots of friends,” Paul says, “and, dare I say, fans.”

The original interviews and article were conducted over January 2017 and Jenna Davinci is no longer a current member of Dragpunk.