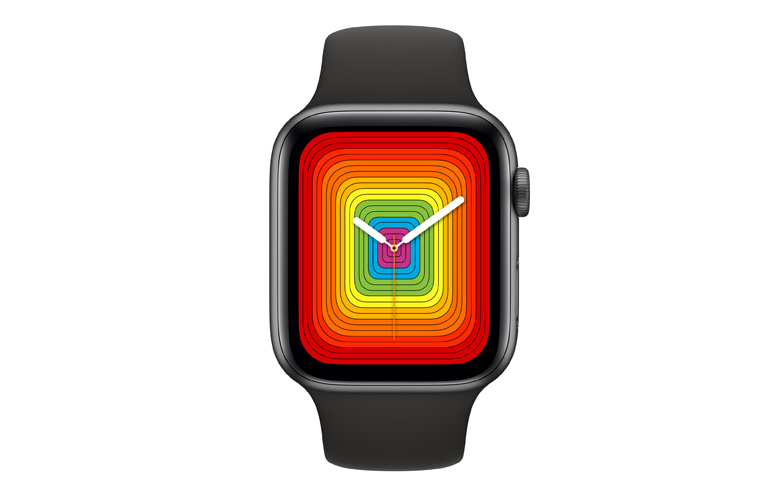 Apple Watch may let you strap more technological power to your wrist than ever before, but there’s nothing more powerful than Pride. (See what we did there?)

Well now you can have both as Apple have launched a range of new colourful Apple Watch Pride watch faces this week ahead of all the celebrations taking place this summer.

The vibrant watch face actually moves every time you lift your wrist and the colours will randomly change.

The Pride watch faces are a free update for Apple Watch users, so make sure you download yours and wear it proudly.

With an openly gay CEO at the helm with Tim Cook, Apple has always prided itself on supporting the LGBTQ community.

Last year they celebrated same-sex couples in an advert for their latest iPhone model.

The video, which is set to the song Never Tear Us Apart by Courtney Barnett, featured a compilation of clips of same-sex weddings between men and women that have been filmed on the iPhone X.

What’s more, back in 2017 Apple introduced two gender-neutral emoji for the first time – both in a variety of skin colours, of course.

Apple CEO Tim Cook, meanwhile, revealed last year that he went public with his sexuality because of the influence it would have on LGBTQ youth.

“I was public because I started to receive stories from kids who read online that I was gay,” he admitted, before explaining that staying in the closet would be “selfish” of him, especially when he could help so many others who have bullied because of their sexual orientation.

“I needed to do something for them,” Tim continued. He also wanted to prove to children that they can “be gay and still go on and do some big jobs in life.”

Regarding his own role at Apple, Tim said coming out as gay helped develop his skills as a leader.

“I learned what it was like to be a minority,” he said. “The feeling of being in a minority gives you a level of empathy for other people who are not in the majority. That turns out to be pretty beneficial from this role as well.”

This year marks the 50th anniversary of the Stonewall Riots in New York City, which kick started the Pride movement as we know it today.

Meanwhile, GAY TIMES recently became the first LGBTQ media brand in the world to become a curator on Apple Music.

Through our regularly updated playlists – which include Queer & Now and Queeroes – we have been given space on the platform to showcase both emerging and establish LGBTQ music talent.

To add our playlists to your library, you can visit the GAY TIMES curator page on Apple Music now by clicking here.