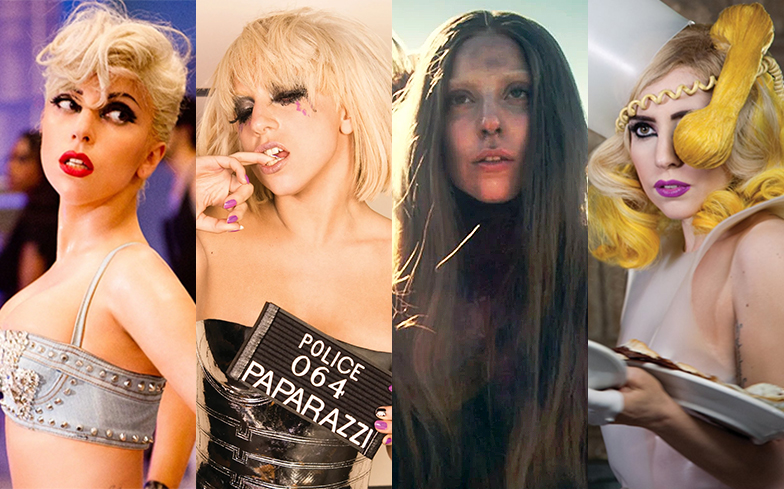 We’re sorry to inform you that Eh, Eh (Nothing Else I Can Say) didn’t make the list.

In just 10 years, Lady Gaga has cemented herself as one of pop music’s most important stars of all time; her endless back catalogue of hit songs, eclectic fashion choices and show-stopping live performances have had immeasurable impact on the entertainment industry.

She also helped revitalise the music video as an artform, following in the footsteps of heavyweights like Janet Jackson and Madonna by turning her visuals into pop culture moments – who can forget the first time they saw the epic Bad Romance?

Below, we’ve ranked what we believe are the top 10 music videos from the pop superstar. Sorry (not sorry) in advance if we’ve missed your fave.

Poker Face will always remain one of Gaga’s most popular songs, and the music video no doubt helped its success. It’s a glamorous, glitzy affair that set the standard for many future Gaga videos – memorable choreography, iconic outfits, sexual innuendo and platinum blonde wigs (including that hair bow). It’s a great music video, although it doesn’t quite push the boundaries like the rest of the visuals on this list.

Gaga has spent her career as a voice for the outsiders, and Born This Way saw her channel that energy into one of the biggest LGBTQ anthems of all time. The lyrics, “No matter gay straight or bi, lesbian transgender life, I’m on the right track, baby I was born to survive,” helped a generation of queer teens celebrate who they are, while the video sees her give birth to a new extraterrestrial race which “bears no prejudice, no judgment, but boundless freedom” – there’s even a unicorn, just in case the point wasn’t clear enough. The video doesn’t always make sense, but then it doesn’t really have to.

Gaga kicked off her polarising ARTPOP campaign by channeling the era’s “my ARTPOP could mean anything” mantra into the Applause music video, channeling everything from Black Swan to Botticelli’s The Birth Of Venus. Following the darker, more serious Born This Way era, it was refreshing to see Gaga return with a burst of colour (literally) and some good old-fashioned camp. It helped that the song was an absolute banger, too. She later recreated the video at the 2013 Video Music Awards with five incredible costume changes, solidifying its place in the pop culture pantheon.

After a stripped-back era like the one ushered in with country-pop album Joanne, many fans were left concerned that the colourful and outrageous music videos Gaga has become known for were gone for good. Then, out of nowhere, she dropped this stunning John Wayne visual, becoming one of her most outlandish videos to date. It featured all the staples of a great Gaga video; choreography, high-fashion lewks, and machine gun boots. Obviously. It’s an underrated gem that deserves way more attention.

While the stunning Bad Romance is seen by many as the beginning of Gaga’s career as a champion of the music video art-form, Paparazzi remains one of her best, and is often overlooked. Sure, Just Dance and Poker Face were visually interesting, but this felt like the first time Gaga got to show herself off as more than just another glamorous pop girl. Both the song and the video encapsulated her debut album’s obsession with fame, but stood out for having a darker tone and holding more substance than the rest of the era’s content. How many pop stars can say they’ve released a video as epic as this from their debut album? Not many. Also, the video features Alexander Skarsgård. Need we say more?

With the success of musical romance flick A Star Is Born and a relatively tame country-pop album, it’s strangely easy to forget that Gaga was once one of the most controversial pop stars in the world – and things don’t come more controversial than Judas. Gaga took on the role of Mary Magdalene for the biblical epic, which also saw The Walking Dead’s Norman Reedus portray Judas. It was released shortly after Easter Sunday, facing backlash from religious organisations. When questioned about the controversy, Gaga replied: “The only controversial thing about this video is that I’m wearing Christian Lacroix and Chanel in the same frame.” Iconic.

Gaga has always channeled her personal life into her music videos, usually through symbolism and metaphors, but Marry The Night is her most brutally honest yet. It’s a 14 minute long autobiographical epic with a dab of fantasy for good measure, as she explains in the video’s opening monologue. “When I look back on my life, it’s not that I don’t want to see things exactly as they happened, it’s just that I prefer to remember them in an artistic way,” she says as she’s pictured being wheeled into a clinic. The video tells the story of the “worst day of [her] life” – when she was dropped by her first record label – and the breakdown and comeback that resulted.

Contrary to what many pop music stans will have you believe, ARTPOP was a fantastic album. While it never fulfilled the potential it deserved, both critically and commercially, it did get an incredible send-off with a final music video for not one, not two, but three fan favourite tracks on the album. The self-directed epic begins with the record’s title track ARTPOP, as Gaga is betrayed and left for dead by money-hungry men in suits, definitely a nod to the troubles she’s faced in her career. As the wonderfully bonkers Venus (our favourite from the album, FYI) plays on, the singer is restored to her former glory by The Gays™ and a selection of Real Housewives. Then kicks in the main event, G.U.Y. (the ultimate should’ve-been-a-hit), as Gaga struts around Versace’s mansion, resurrects Michael Jackson and Jesus, and ends up back on top where she belongs. MANiCURE even gets a cute nod in the video’s closing credits, which are a whopping four minutes long because of the sheer spectacle.

Bad Romance is the most influential music video of the 21st century. That’s not an opinion, it’s a fact. The legendary visual was a representation of the way the entertainment industry treats its stars – particularly its women – in a conveyor belt manner, viewing them merely as a commodity or a sex object to be sold. It took home seven(!) Video Music Awards and was groundbreaking for its time, becoming the first music video to hit 200 million views on YouTube, and has since garnered over a billion clicks. The video cemented Gaga’s status as a pop icon less than two years into her major label career, and was further proof of her artistic genius as she actually had to scale the video back due to a small budget on the project – not that anyone would realise watching it back. Bad Romance is commonly referred to as Gaga’s Thriller, and it’s a comparison that’s more than deserved.

We realise this might be a controversial choice, but hear us out. While Bad Romance is undeniably iconic, the long-form nature and increased budget of Telephone allowed even more creativity and visual excellence than its predecessors. With this Jonas Akerlund-directed clip, Gaga pushed the boundaries of what a music video can be, telling a crime-filled story worthy of a Quentin Tarantino movie (it literally featured the Pussy Wagon from Kill Bill) that saw her get bailed out of prison by actual Beyoncé – can you image!? – before murdering an abusive lover and crossing the border together. Thelma and Louise, who? It featured some of her most iconic looks of all time – the Diet Coke can wig and ‘caution tape’ outfit, for example, are still recreated to this day –  blessed us with some of the most insanely quotable lines in pop culture history (“You’ve been a bad girl, Gaga,” is a highlight) and led to countless think-pieces dedicated to deconstructing the visual and its subliminal messages. Everything, even down to the product placement from the likes of Plenty Of Fish and Wonder Bread, just works. Plus, how many music videos can say they’ve inspired almost a decade of campaigning from fans for a sequel? We’re still convinced it’s coming. Don’t let us down, Gaga.