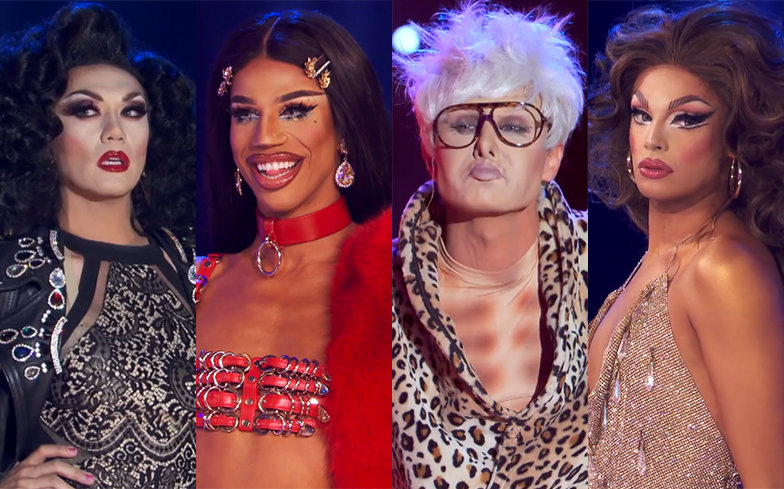 This season of All Stars featured some of the most gag-worthy lip syncs in Drag Race HERstory.

But are you surprised? We had some of the most sickening lip syncers return for a second (and in some cases, third) shot at the crown, such as Manila Luzon, Trinity The Tuck, Latrice Royale, Monét X Change and Naomi Smalls.

Some of the other queens didn’t have the best track record when it came to lip syncing for their life (Monique and Valentina, especially), but henny, every single one of these queens came to play (that).

In celebration of the finale, we ranked every single performance from this season. Please let us know if you strongly disagree!

13. Latrice Royale vs Trinity The Tuck – You Spin Me Round (Dead or Alive)

We waited so long for this song to be used as a lip sync, and lordt… Trinity and Latrice are two of the most legendary lip syncers on this show, and this is all they could come up with? Latrice literally walked up and down the stage, and Trinity put on the bodysuit of a 90-year-old corpse and looked like a possessed Jane Levy from the Evil Dead reboot. Worst one this season by far.

Farrah Moan and Valentina’s rivalry came to a head in the sixth episode of the season, which saw the eliminated queens fight for their place back in the competition by lip syncing against a current competitor. Unfortunately, the song they were dealt with was Kitty Girl, which is an anthem, yas, but it’s not the best song to perform to. Both queens did a good job, but we just wish they were given something else.

It was rigga morris gurl! How was Trinity not going to win a lip sync to Peanut Butter? The eventual winner and Jasmine battled it out on stage to Mama Ru’s sex anthem and yeah, it was fun. Trinity provided us with her signature ass shake and Jasmine, well… Jasmine had no ass. At least she found it funny.

Who won? They’re both winners baby!

There are some lip syncs that make us go “Yaaaaass werk bitch!” and then there’s some that are just… heartwarming? Is that the right word? Manila and Monét’s lip sync, while great, didn’t deserve a double shantay, but both of them were going to triumph because of the twist anyway, which saw the eliminated queens ru-turn for the ru-venge. But we’re not mad, it gave us two more weeks of Valentina.

9. Monique Heart vs Manila Luzon – The Bitch Is Back (Tina Turner)

Monique’s first lip sync win! Can you believe? The performah took down Manila (not an easy feat) to Tina Turner’s cover of The Bitch is Back in the fourth episode of the season, and ultimately eliminated Latrice, which resulted in a devastated Manila, who wanted nothing more than to save her best friend. It was the first time in history that we’ve seen a queen in the top two look so broken at not winning ten thousand doollahz.

7. Trinity the Tuck vs Monique Heart – When I Think of You (Janet Jackson)

Whoever suggested more Janet Jackson songs on the series needs a raise, pronto. Monique and Trinity battled it out for the second time this season and it gave us L-I-F-E, life! It was strong from start to finish and, unlike other lip syncs, had fashun! We were living for the performances and we were living for the lewks.

Who won? They’re both winners baby!

The final lip sync of the season saw the top two All Stars, Monét and Trinity, give it their all to Christina Aguilera’s pop rock anthem Fighter (which we’ve been waiting ten years for, so thanks Ru!). Even though we’ve seen both of their moves before, it was a mothertucking showDOWN, and resulted in the series’ first ever double crowning. Gag!

5. Valentina vs Monét X Change – Into You (Ariana Grande)

Valentina didn’t do the splits, she didn’t do flips, she didn’t do kicks, but bitch, she turned it OUT. The Miss Congeniality didn’t have the best reputation when it came to lip syncing (see Greedy), but received her long-awaited redemption “with an Ariana Grande song no less”. Even Monét couldn’t keep her eyes off her.

Who win? They’re both winners baby!

If we were to show a Drag Race virgin a lip sync from the series, we’d probably show them Shut Up and Drive from All Stars 2 and then probably This Will Be from season four. Now we have another contender! It wasn’t the best this season, but if you’re gonna get someone into the show, chances are you’ll choose an uptempo lip sync with deathdrops, splits and two queens out for blood. This is that.

We’ll admit, we love our mainstream dance-pop bops for lip syncs, but we also love an obscure song choice, because sometimes, they’ll make for the most legendary showdowns (Jinkx vs Detox, anyone?). With this performance, Naomi proved that she isn’t just a lewk queen. She served flexibility and body-ody-ody as per, but her facial expressions made this one of the most sickening individual performances we’ve ever seen on the series.

2. Manila Luzon vs Trinity The Tuck – How Will I Know (Whitney Houston)

Manila Luzon was Whitney in this song and we won’t hear any different. When she sashayed to the back of the stage, it was over honey. Trinity was fantastic, and if it were any other queen she would’ve won, but Manila is a lip sync powerhouse. Can you believe this was her first lip sync win since MacArthur Park?

We’re all agreed on this one yeah? Naomi and Gia’s performance to Adrenaline should’ve been the only double shantay this season. The latter proved why she’s a worthy member of the Haus of Edwards while Naomi channelled her inner praying mantis and provided us with FLEXIBILITY. We watch it daily tbh.

Related: Here’s how former Drag Race contestants reacted to the All Stars 4 finale.