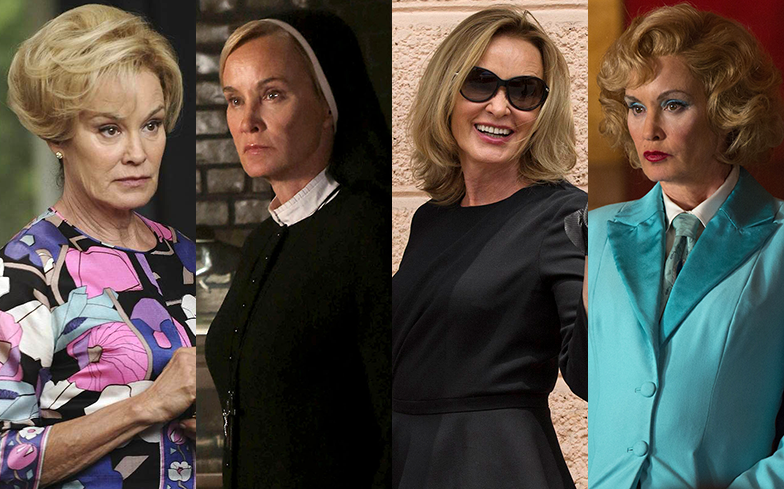 The two-time Oscar winning actress returned as Constance Langdon, her first ever character on the acclaimed series, for which she won a Primetime Emmy Award, a Golden Globe Award, and the Screen Actors Guild Award back in 2012.

Her appearance didn’t disappoint, with Constance providing us with some more classic one-liners and iconique gifs. We have no doubt at all that she’ll snatch another Emmy, this time for Outstanding Supporting Actress in a Limited Series or Movie.

She left us so fucking slain that we’ve decided to revisit all of her characters on American Horror Story, and rank them. So, without further ado… Most iconic quote: “My monsters, the ones you call depraved, they are the beautiful, heroic ones.” Most iconic quote: “Let me give you a fair warning: I’ll always win against the patriarchal male.”

Out of all of Jessica Lange’s characters on the series, Sister Jude experiences the biggest transformation. At the start of the season, Sister Jude is portrayed as the stern head nun of Briarcliff who aims to make the asylum a model institution to atone for her past sins. Despite her initial cold demeanour, Sister Jude is shown as compassionate to the inmates, and eventually makes it her duty to stop the inhumane acts happening at the asylum. Because of this, she’s admitted as a patient and forms a bond with Evan Peters’ character Kit, which is without a doubt one of the most heartwarming relationships on the series. That final scene never fails to make us sob, honestly. She also provided us with one of the most iconic musical numbers on television: The Name Game, which didn’t win any Grammys. Utter blasphemy. Most iconic quote: “I’m Constance Langdon, and this is my fucking house.”

Constance Langdon is the original bad bitch of American Horror Story, so much so they brought her back for the eighth season for a special guest appearance, and when she was announced to return, the internet broke. Why? Constance introduced Jessica Lange to a brand new audience, ultimately winning her all the awards we mentioned above, and is one of the most quotable and gif-worthy characters in television history. We’ve all used that meme of her sliding down the wall in agony, haven’t we? Even though her character was a cold-blooded murderer who raised a serial killer son, she was extremely likeable. She raised the anti-christ and still had time to plant her garden for fuck’s sake. What a queen!

Most iconic quote: “In this whole wide wicked world, the only thing you have to be afraid of, is me.”

Fiona Goode is not only Jessica Lange’s best character on American Horror Story, she’s the best character on American Horror Story, period. The Supreme witch of her generation, Fiona returns to Miss Robichaux’s Academy following the murder of Misty Day to reconcile with her daughter, Cordelia, and to teach the students how to defend themselves against demons, evil-dwellers and all that. She’s a fantastic character because she has, by far, the wittiest dialogue of any AHS character, and is without a doubt, one of the most powerful, cut-throat witches in fiction. The scene where she telekinetically blasts Madison Montgomery against the wall without batting an eye? Honey honey honey. We’re patiently waiting for Ryan Murphy to bring Fiona (and Marie Laveau) back to kick the shit out of Michael Langdon. Just imagine.