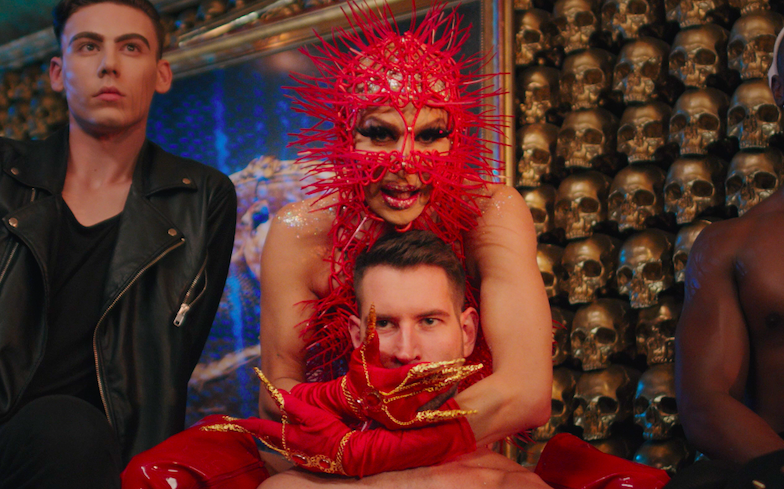 Trinity The Tuck has unveiled the fierce mothertucking video for The Face The Body.

The legendary performer – who’s currently competing on the fourth season of Drag Race All Stars – is a certified Glamazon in her high-budget sci-fi inspired clip, and we are living for it.

“When we decided to do this music video, we were all brainstorming on what the theme should be,” Trinity said behind-the-scenes. “We came up with the concept of this being who wanted to create the perfect woman and send her to Earth take over with sex.

“It sounded a little dumb at first, but it’s like the perfect drag queen narrative for a music video and I think we did a really good job with executing it. The concept was super strong, and my team and I were really excited about it.” Tyler Stone, director of The Face The Body, said working with Trinity was a “dream”.

“We formed our working relationship years ago when we were both still living in Alabama,” he told us. “I’d help her brainstorm creative performance ideas and produce custom drag performance mixes for her.”

He continued: “For inspiration for the video, we went more minimal as opposed to the typical run-of-the-mill sci-fi tactics.

“I feel this lets the user go under the surface for a more visceral and thought provoking experience. Sex and sci-fi, where can you go wrong?”

The Face The Body is now available on iTunes and streaming services. Watch the sickening video below.

In the latest episode of All Stars, Trinity earned her third win of the season, bringing her total challenge wins on Drag Race to six. So yeah, when we said ‘legend’, we meant it.

Drag Race All Stars 4 is available to stream in the UK on NOW TV.

The following episode will air this Friday in the United States on VH1 and shortly after in the UK on Comedy Central.