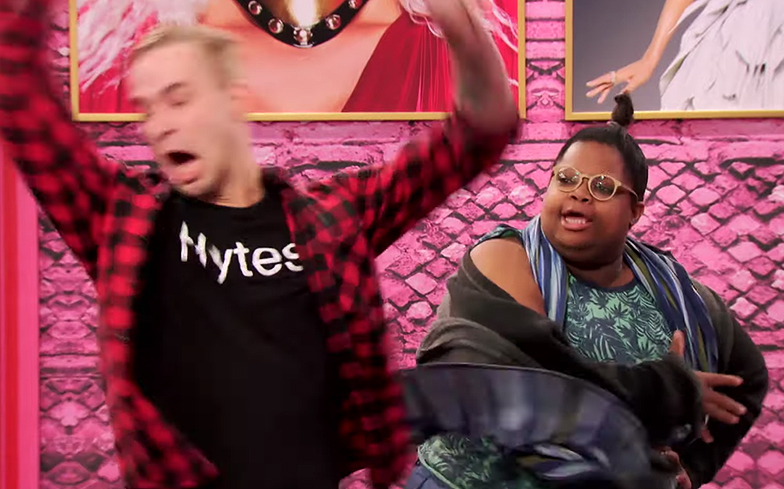 “I’ve been waiting to slap your ass since week two!”

In a preview for this week’s Drag Race, the remaining six queens take part in Slap Out Of It, which sees them come up with sassy one-liners to encourage their fellow contestants to fake slap them – with as much dramatics as possible, of course.

“Ladies, if I could pass on just one life lesson to each and every single one of you, when the going gets tough, the tough gotta know when it’s time to fake bitch slap a mothertucker,” RuPaul says to the queens.

We don’t know about you, but we’re getting major flashbacks to when Mama Ru accidentally slapped Asia O’Hara in season 10.

What ensues might just be one of the most hilarious mini challenges in the show’s herstory, as Brooke Lynn Hytes puts her ballet training to excellent use and comedy queens Nina West and Silky Nutmeg Ganache deliver the laughs.

“I don’t know a whole lot about Canada or the people in it, but judging by your Snatch Game, neither do you,” Yvie Oddly says to Brooke, in one of several gag-worthy takedowns. “Am I allowed to slap a homeless person?” Brooke responds.

Remember kids, shade is for lounging, not throwing.

The preview ends with RuPaul dropping a bombshell on the remaining queens, as he reveals he’s arranged a “playdate” with some of his favourite queens – all of whom were eliminated previously in this season.

Returning to the werk room are Soju, Honey Davenport, Ariel Versace, Scarlet Envy, Plastique Tiara and Shuga Cain, who will all be paired up with one of the remaining queens for the makeover of a lifetime. “Bitch, hold the fuck up, why have they brought these bitches back? I don’t like games, I don’t play Uno, checkers, Monopoly,” says Vanjie after the game-changing reveal.

“I don’t know what’s going on. Last time they brought back other girls who were eliminated it didn’t end up good. I’m worried, and I pray that they’re not gonna replace some of us with some of them.”

We’re not quite sure what the rules will be yet, but when previous seasons have paired eliminated queens with remaining queens, the winning eliminated queen has been granted the right to return to the competition.

If that’s the case, who do you hope it will be? Could Scarlet get her ru-demption after many fans felt she was unfairly eliminated? Will fan favourite Plastique make a comeback? We’ll just have to wait and see…