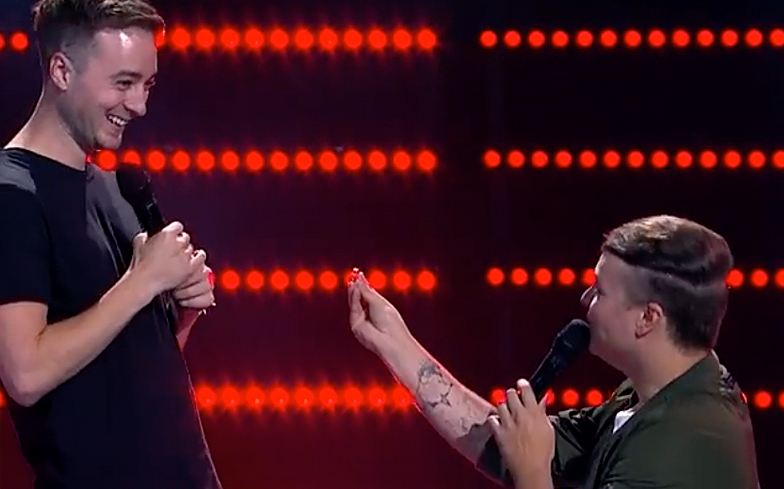 If the moment when a contestant on The Voice makes a decision on which coach they want to work with isn’t dramatic enough, Nathan Brake upped the stakes during his audition.

Before the singer revealed who out of Boy George, Kelly Rowland, Joe Jonas and Delta Goodrem he would work with on the Australian version of the show, he asked for his boyfriend to join him on stage.

“I just wanted to bring you out here because we’ve had a beautiful six years together,” he told Mitchell, as Kelly Rowland clicked as to what was about to go down. “You’ve been a constant support, so I just wanted to ask you, will you marry me?”

Luckily, Mitchell replied with a simple “Yes, of course,” to which the crowd erupted in cheers.


Of course, this comes mere months after Australia legalised equal marriage back in December.

The coaches were full of congratulations, but it was Kelly Rowland who offered them the best wedding gift of all.

The Destiny’s Child singer told the couple to keep her on the wedding list regardless of whether or not Nathan chose her to be his coach, as she promised to sing When Love Takes Over on their special day.

“Are you serious?” Nathan asked.

“I’m very serious. If you give me a mic and guitar honey, we will make that thing happen,” she replied.

Now that’s what we call a successful audition and proposal.