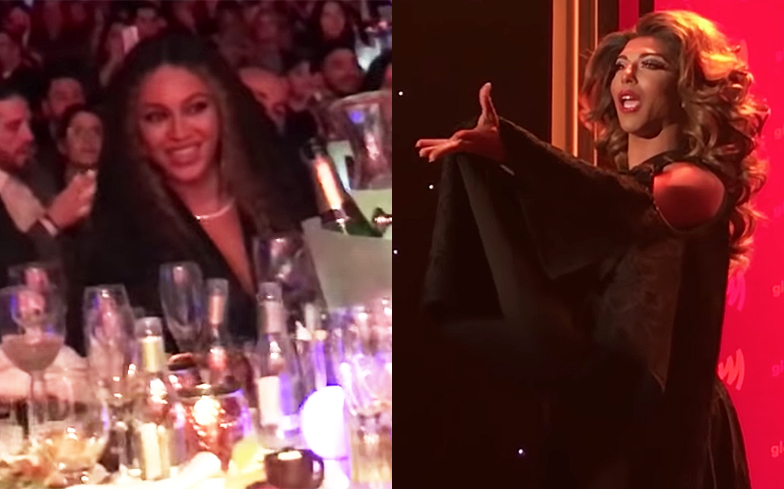 This might be the most sickening thing we’ve ever seen.

Last week, music sensations Beyonce and husband Jay-Z were honoured with GLAAD’s Vanguard Award, which is given to allies who have made a significant impact on promoting acceptance for the LGBTQ community.

In their joint speech, Beyoncé honoured her late uncle Johnny, who she described as “the most fabulous gay man” she has ever met, while Jay-Z spoke about his mother, who came out as gay a few years back.

But the best moment came just before their speech, when RuPaul’s Drag Race legend and former Gay Times cover star Shangela performed a medley of Beyoncé’s biggest hits for Queen Bey herself.

Beginning with a powerful lip sync of ballad I Was Here, the drag superstar whipped the crowd into a frenzy with performances of Partition, Flawless, Baby Boy, Bootylicious and of course Single Ladies.

Her routine received multiple standing ovations, most notably from Jay-Z and Beyonce themselves. Is there anything Shangela can’t do?

Watch a clip of the fierce performance below.

“My very FIRST drag performance as Shangela, I performed Beyonce Single Ladies. Ten years later, I was blessed to honour the actual BEYONCE in a full-out tribute performance,” she wrote.

“I can’t express how grateful I am for this moment. It’s been quite the journey, right y’all?!? I appreciate u sticking with me and I hope that you stay inspired to keep going for your dreams!”