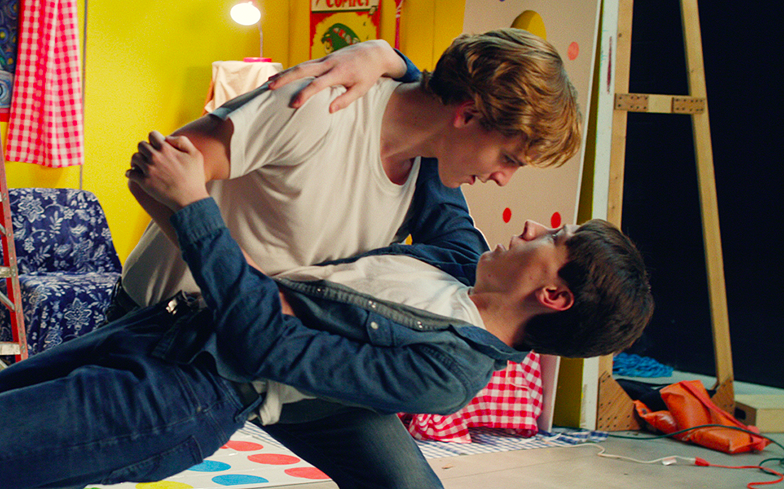 Looking for a new queer film to watch? This might be just what you need.

How The Moon Fell From The Sky And No One Even Noticed is a brand new musical drama that will feel all too familiar to many gay men: Growing up different in a small, conservative town and falling in love with your straight best friend.

Directed by Christina Xing and written by Jack Fossett, the film tells the story of best friends Benji (Peter Carroll) and Ruben (Nick Trivisonno) as they make a film about the man on the moon, but their feelings for each other start to get in the way.

Even more impressive, the film was created entirely by high school talent, crew and orchestra on a budget of only $3,000.

“At its core, this film is essentially a diary entry. I grew up in a small city in the Midwest and I’ve been out of the closet since I was thirteen, so I’m no stranger to loneliness and isolation, or perceived isolation,” screenwriter Jack tells Gay Times.

“All of the emotion in the film is lifted straight from real life. The pain and the heartbreak, as well as the liberation of growing up in an environment that isn’t necessarily unsupportive or unfriendly, but just isn’t equipped to handle you yet.

“I want young artists, queer and otherwise, to walk away from this film understanding that their dreams are worth pursuing, that all bad things come to an end, and that not even the sky is the limit.” The film’s director, Christina Xing, says the idea for the project came to her as a result of facing rejection from all her top films schools. It was during this time that she recalled how all her favourite childhood movies were musicals.

“They were beautiful, magical and nostalgic,” she says. “And then I thought about the movies that move me so much in the present: The French New Wave. These creators didn’t play by any rules. They let cinema be free.

“I wanted that, and I realised the only way I was going to create a slice of forever and gain control again was making a French New Wave Musical. Something completely honest, vulnerable and naked with my best friends on the planet.”

Much like the film itself, what Christina wants viewers to take away is that there’s beauty to be found in everything.

“Even amidst some of the hardest times of your life, have the courage to see the magic and beauty within the tragedy,” she says. “There’s so much beauty in the world, in friendship, in first love, in lost love. In everything.”

You can watch How The Moon Fell From The Sky And No One Even Noticed in full below.