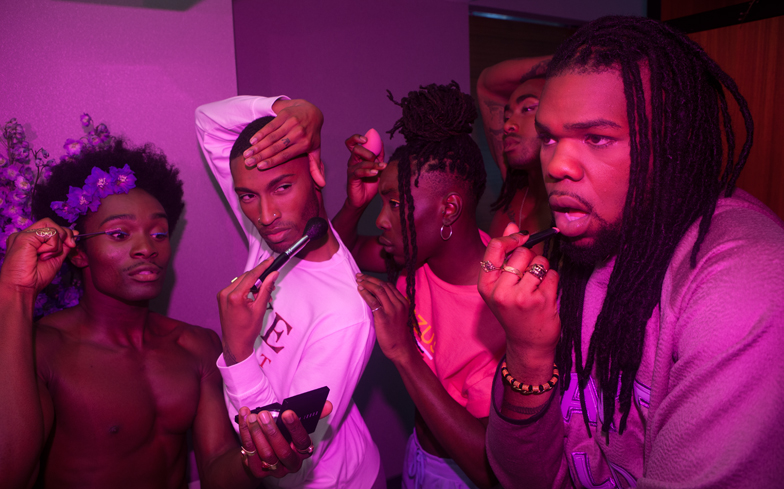 When we first spoke to MNEK about what he’d like to do for his first ever Gay Times cover shoot, his answer was instant: a slumber party with his backing dancers known as The KiKi.

You’ve no doubt seen the troupe – consisting of Busola Peters, Daron Gifty, Kieran D-W and Randall Watson – flank MNEK during his shows across the summer, or busting some killer moves in his music videos.

You can now see them serve slumber party realness with the British singer-songwriter in the September issue of Gay Times, which is on sale now.

Not only that, we have an exclusive behind the scenes look at the shoot, which you can watch below.

“The Gay Times cover shoot was so much fun, it was great to be able to be a part of creating images that will hopefully open some people’s eyes on what black masculinity can be AS WELL,” MNEK tweeted earlier this week. “Stay fabulous honey.”

During his cover interview with Gay Times, MNEK – real name Uzoechi Emenike – spoke about being a positive role model within the LGBTQ community – especially for queer people of colour.

“When I went to UK Black Pride, I came across so many young queer kids of colour who came up to me and say thank you,” he told us. “Even the video shoot I just did the other day for Correct, this guy who was on set working came to me after and was like, ‘I’m not going to get emotional, but thanks so much, you did this for me and it’s so great to see an African gay artist out there doing pop shit, and not trying to be cool or edgy or underground. Really just going for it, and doing the popstar thing.’ “I call it the popstar thing because I’m still getting used to it. It’s not like I’ve always done this, where I’m dancing in my videos and really going for it. I think it’s cool that it helps people. It makes it so it’s beyond just the music.”

MNEK covered the latest issue of Gay Times in support of his long-awaited debut album Language, which is out now.

The collection features the singles Tongue, Colour, and Paradise, as well as huge bops Girlfriend and Correct.