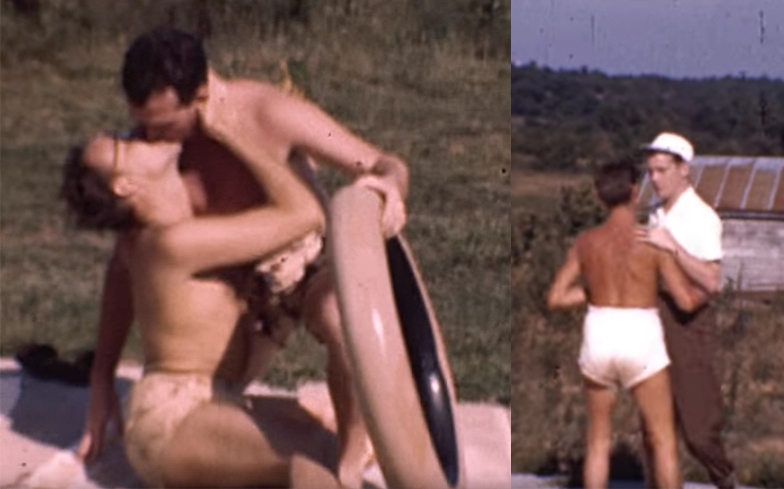 “I kind of couldn’t believe I was seeing it.”

It was the mid-90s when St. Louis filmmaker Geoff Story stumbled upon some old film reels at an estate sale at a mansion on Lindell Boulevard in St. Louis, which used to be the home of the now-deceased Buddy Walton.

But when he put them in a projector, he couldn’t believe what he was seeing.

The footage contained scenes of same-sex love from the 1940s – an era when homosexuality was not only taboo, but illegal.

“These men are still in their 20s in the sun, swimming, like they always will,” Story told St. Louis Public Radio.

“There’s a real sweet pain, and when you watch it, there’s a happiness but you can’t believe it’s so long ago and you can’t touch it–it’s gone.”

Buddy Walton was well known as St. Louis’ “hairdresser to the stars” and styled the dos of everyone from Eleanore Roosevelt to Ethel Merman.

Related: Looking back at the forgotten stories of gay men who fought in two World Wars

As you can see from this unearthed footage, he also liked to throw lavish pool parties at his property.

“It speaks to a wide array of people on a very deep level,” Graden said of the footage. “What are the chances someone would go to an estate sale and pick up these canisters of old footage? It’s almost like these men are trying to talk to us from beyond the grave.”

The film will offer a rare peek into the lives of LGBTQ people as the second world war came to a close, when they were forced to live their authentic selves only in the privacy of their own homes.

There’s even a moment in the footage where a uniformed World War II soldiers kisses another man.

“There was such a beauty in that moment,” Geoff said. “I kind of couldn’t believe I was seeing it.”

The makers of Gay Home Movie are currently interviewing the families and friends of the men in the film, to find out more about their lives during the time this footage was filmed.

To find out more about Gay Home Movie, click here.