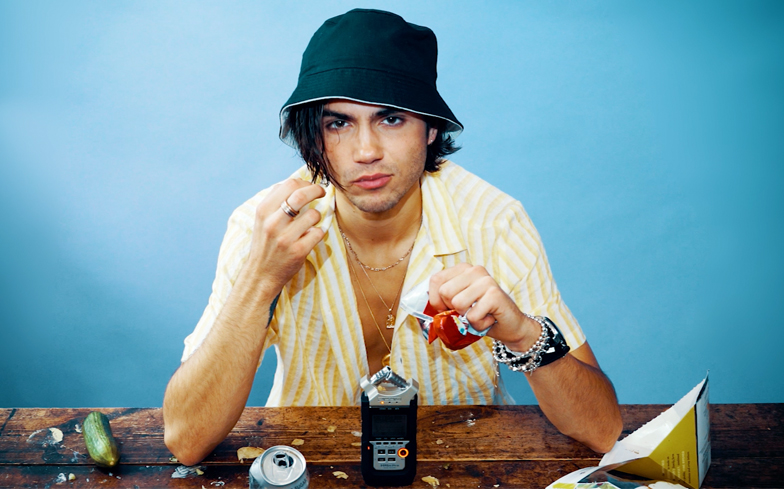 After we wrapped on set for George Shelley’s cover shoot for the November 2018 issue of Gay Times, we introduced him to the internet craze that is ASMR.

Autonomous sensory meridian response is a tingling sensation some people feel on their skin or down their spine when reacting to soft, almost silent sounds.

The likes of Spirit Payton and Life with Mak have generated millions of views on YouTube for their ASMR videos, where they crunch on pickles, eat peanut butter, and scrape textured surfaces with their nails.

After showing George a couple of ASMR videos, he agreed to explore the phenomenon himself by creating his own instalment just for Gay Times.

In the visual he cosies up to a mic to slurp on Diet Coke, crunch on a cucumber, and make his way through a packet of crisps, with varying degrees of ASMR success.

Watch the video below to see how George got on…

The British singer-songwriter covers the current issue of Gay Times, which is available to buy now.

In conversation with Sir Ian McKellen, it’s one of George’s most candid interviews yet as he speaks about his childhood, the pressures of fame, and how his family reacted to his coming out.

“People knew, and then I started going out, Jaymi would take me to these clubs, and people would see me with these guys,” George told Sir Ian. “I’d be kissing these guys on nights out like any other 20-year-old would do when you’re experimenting, and that’s absolutely OK.

“But because of the situation I was in – in the public eye selling records aimed at young girls – I feel like I was made to believe, and made to think, because of the things I was being told and the way I was conditioned, that it would’ve jeopardised the band’s career. And in turn jeopardise my own career.” George is now a proud openly gay man, and wants to use his platform to promote equality, visibility and acceptance for the LGBTQ community.

Asked by Sir Ian what he enjoys most about being a gay man, George replied: “Do you know what, it’s male comfort for me. I love being comforted and protected, and I think it goes back to my childhood of feeling very lost and vulnerable and wanting to hide that side of me.

“But now as an adult I’m able to see that and fill that void. This is really honest, but it’s true and it’s how I perceive it: I love the comfort of a man.

“So I lost my virginity to a girl but that wasn’t until after the whole X Factor experience. When I was in the public eye, that was a scary time for me because I was then all of a sudden not only keeping this secret from my family, but from a lot more people.”