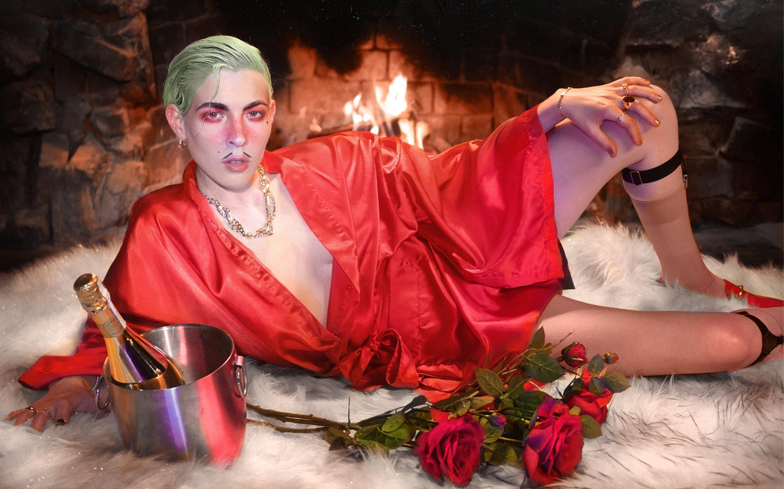 With a title like Flamboyant, there was only one way Dorian Electra’s new music video could go.

The music artist was inspired by the extravagance of Liberace and his partner Scott Thorn for the visual that accompanies their new single, which is available to stream and download now.

As you can see in the video below – which was co-directed by longtime collaborator Weston Allen – the setting, costumes, make-up and wigs are all the right kinds of extra.

“Historically, the word ‘flamboyant’ has been used as a derisive term to describe over-the-top queer expression,” Dorian explains.

“I wanted to reclaim this word in a proud and unapologetic way, while at the same time poking fun at the need for masculine egos to be the center of attention at all times.

“Through satire in the video and track, I aim to take down this self-centered-bravado, while also encouraging a healthy level of confidence and self-love within one’s gender expression.”

Flamboyant has been lifted from Dorian’s forthcoming debut album, with more details about its release coming later this year.

“I’m so grateful for every queer artist who has ever inspired me, particularly the drag queens, club kids, and performers in Chicago who really welcomed me into the community and made me at home and like I could be myself yet also challenged me to push the boundaries of my own personal expression and art,” Dorian told Gay Times Magazine last year.

“And I’m so proud to be able to call so many of these artists my friends.”

Dorian has previously collaborated with Charli XCX on Femmebot, which was included on her 2017 album Pop 2.