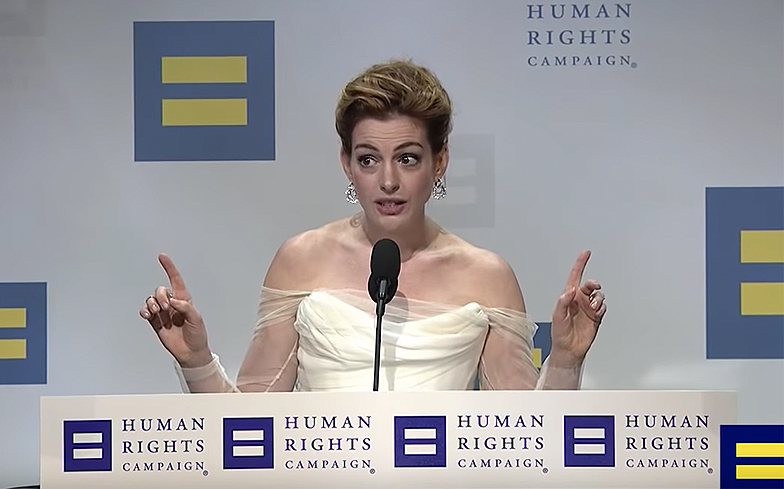 Academy Award-winning actress Anne Hathaway proved yet again why she’s one of the LGBTQ community’s most visible advocates.

The star was honoured with the Human Rights Campaign National Equality Award this weekend, and used her acceptance speech to deliver a powerful message to a 10-year-old trans girl.

Hathaway explained that Ella had named herself after her movie Ella Enchanted and had thanked her for having the courage to be an outspoken ally for the community.

Anne Hathaway had a message for a 10-year-old transgender girl named Ella who wrote Anne a letter. Ella named herself after Anne's character in Ella Enchanted.

In the letter, Ella thanked Anne for having the courage to be an ally.

Acknowledging the message, Hathaway said: “Ella sweetie, I want to make something absolutely clear to you, it takes zero courage to love you.”

Elsewhere, Hathaway urged everyone to break down the myths that affect the LGBTQ community and all minority communities, so society can head towards true equality.

“That myth is that gayness orbits around straightness. That transgender orbits around cisgender. And that all races orbit around whiteness,” she said.

“This myth is wrong. But this myth is too real for too many. It is ancient, so it is trusted. It is a habit, so it is assumed to be the way things are.

“It’s inherited, so it’s thought immutable. Its consequences are dangerous because it prioritises a certain type of love. A certain kind of body. A certain kind of skin colour. That there’s not value in anything it deems to be other to itself.

nothing but respect for my lgbtq+ icon and human rights activist, anne hathaway A.K.A. MY QUEEN OF GENOVIA pic.twitter.com/Gc16FlKHOC

“Authentic equality doesn’t prioritise sexual orientation, it doesn’t put any one gender or race at the centre. It doesn’t erase our identities either. What it does do is centralise love. And when love is fully centralised, every door opens for everybody.”

Speaking about their decision to honour Anne Hathaway with the award, HRC President Chad Griffin said: “Through her incredible talent and bold activism, Anne Hathaway uses her global platform to stand up for the LGBTQ community.”

You can watch Anne Hathaway’s speech in full below: