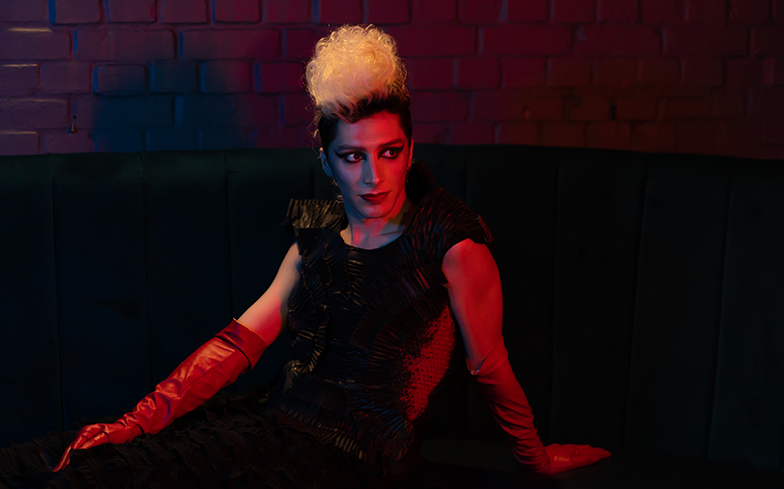 Andrea Di Giovanni has unveiled the music video for their electropop anthem Bang.

In the clip – directed by Julian Grimm x Laélia – the singer-songwriter celebrate their queerness alongside several other faaabulous gender non-conforming people and members of the LGBTQ community.

Andrea can also be seen laying down on newspaper clippings with offensive words that are usually aimed at the LGBTQ community, such as ‘camp’, ‘sissy’ and ‘abomination’.

“Bang is a feel-good anthem aimed at every person who dares to live their own truth; free from the boundaries of shame,” Andrea told us. “It’s a magical rendezvous where we, as human beings, can come together and have a party.”

They added: “In a political climate where self care is being portrayed as subversive, where gender non-conforming/trans individuals are depicted as a threat to the status quo, I wanted to prove the exact opposite.

“By pushing the ‘feeling your oats’ message, dressing accordingly to your identity, and asserting that owning your star power isn’t something negative at all. It’s an empowering process that allows you to reconnect with your true-self without filters – bringing you joy and happiness.”

Speaking of the video, they said it was important to include a “diverse cast of performers and artists” who need to be seen more in mainstream media.

“There’s also a subtle political narrative in the video, where I’m lying down on a pavement made of newspapers and offensive words that we gender non-conforming people have to deal with on a daily basis,” they continued.

“My point is: you can try as many times as you like but you won’t ever be able to cancel us. If anything, prepare to see us take over the world.”

Amen! Bang is now available to stream on iTunes and streaming services. Watch the fantastic video below.