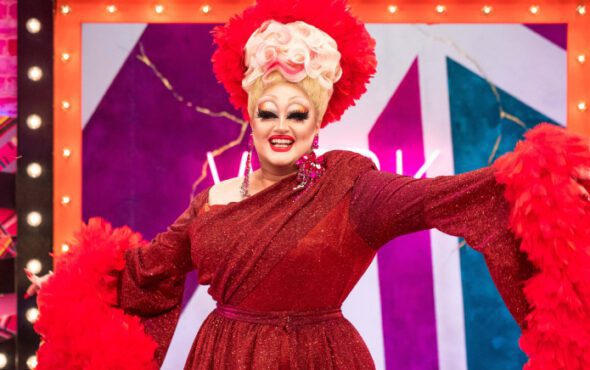 Victoria Scone has ruvealed what she would’ve worn on the latest RuPaul’s Drag Race UK runway.

For their latest maxi-challenge, the contestants were tasked with stomping down the runway in two high-fashion looks: Happy Campers in the Great Outdoors and Campfire Couture, the latter of which they had to create themselves with outdoorsy materials.

However, the unthinkable happened at the start of the episode when Victoria was forced to exit the competition. Following her knee injury in the premiere, which occurred after the queen faced off against Krystal Versace in the lip sync smackdown for the win, Victoria partially tore her ACL.

Although we didn’t get to see Victoria strut down the runway, the Cardiff queen shared her picnic-inspired look on her social media platforms on Monday (11 October) to praise from her followers.

“Why be a snack, when you can be the whole damn picnic?!” Victoria captioned her post. “GREAT OUTDOORS/HAPPY CAMPERS RUNWAY. For this runway I embodied (literally) a picnic blanket, picnic basket & picnic foods! –  Headpiece by me!”

“Wait you’re insane for this. It’s everythinggg,” said one fan, while another responded: “Devastating that you didn’t get to wear it on the runway. You have got an entire army of new fans cheering you on now though! A million hugs to you.”

In another tweet, Victoria joked: “Can you imagine if I somehow managed to make every runway about food.”

Following her devastating exit, Victoria – who made herstory as Drag Race’s first ever cis female competitor – told GAY TIMES that her knee is “good” and she had a narrow escape from surgery thanks to “lots” of physiotherapy.

On whether she’s likely to return for Drag Race UK’s upcoming fourth season, she revealed: “You pretty much know as much as I know! What Ru said is what Ru said. We’re still screening season three at the moment.

“If that happens, it will be very much in the future. I’ve not had an invitation as of yet, so yeah… That’s as much as I can tell you in all honesty! I just don’t know if the fans would want me to come back, it just depends on them! I don’t think they’d want me there! If the demand is there, what can I say?”

Victoria also spilled the T on her plans for Snatch Game, the “overwhelmingly positive” feedback from Drag Race viewers and her upcoming tour, which will feature a “deliciously diverse cast”. You can read Victoria’s entire interview with GAY TIMES here and check out her incredible runway below.

Why be a snack, when you can be the whole damn picnic?! 🧺
GREAT OUTDOORS/HAPPY CAMPERS RUNWAY 🍃
For this runway I embodied (literally) a picnic blanket, picnic basket & picnic foods!
–
🍳 Headpiece by me! pic.twitter.com/0ZoCbtcZrS