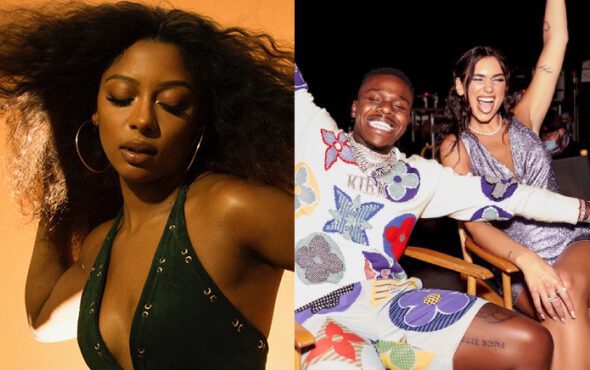 Earlier this week, the rapper made headlines after launching a vicious and uneducated rant about HIV positive people at Rolling Loud Miami.

During his set, he claimed that HIV positive people will “die in two to three weeks” and made derogatory comments about his gay fans “sucking d**k” in the parking lot.

Following enormous amounts of backlash online, the 29-year-old made matters worse as he doubled down on his ignorant views.

Via his Instagram Stories, he said his gay fans “don’t got f***ing AIDS” because they “take care of theyself” and they “ain’t no junkies,” adding: “My gay fans ain’t going for that. They got class. They ain’t sucking no dick in no parking lot.”

He also told those who weren’t in attendance at the show to “shut the f**k up” and not “disturb my motherf**king gay fans and make them feel uncomfortable in they skin”, although that’s exactly what he did with his deplorable speech.

Although Lipa wasn’t involved in the incident, the British singer released a statement condemning his comments, presumably because he’s currently featured on the remix of her acclaimed pop hit Levitating, which has become one of the biggest hits of 2021 and is still climbing charts around the world.

“I’m surprised and horrified at DaBaby’s comments,” said Lipa. “I really don’t recognise this as the person I worked with. I know my fans know where my heart lies and that I stand 100 per cent with the LGTBQ community. We need to come together to fight the stigma and ignorance around HIV/AIDS.”

Lipa, a staunch LGBTQ+ ally who has shown support for various LGBTQ+ causes throughout her career – including the fight against HIV/AIDS – received praise from her fans for speaking out and for unfollowing DaBaby on social media.

Shortly after her statement, Monét said she wants to record her own vocals and replace DaBaby for another remix of the track. On Twitter, she wrote: “If she would like to replace DaBaby’s verse on Levitating I’m totally available.”

It’s safe to say that fans are here for it – check out the best responses below.

YES @DUALIPA I WOULD LOVE TO SEE THIS COLLABORATION WITH VICTORIA MONÉT pic.twitter.com/b5lHnuLJRw

Yeah, let’s get you in the studio ASAP!!!!! pic.twitter.com/JrZWVIlA38

Replacing a homophobic artist with a queer one on Levitating? Let's go ahead and make that into reality pic.twitter.com/VKCHyEGeq2

@DUALIPA my love could we like ughhh make this happen? Pretty pls?

This needs to happen

Then it'll go #1 this time pic.twitter.com/CbHyTJC5Uq