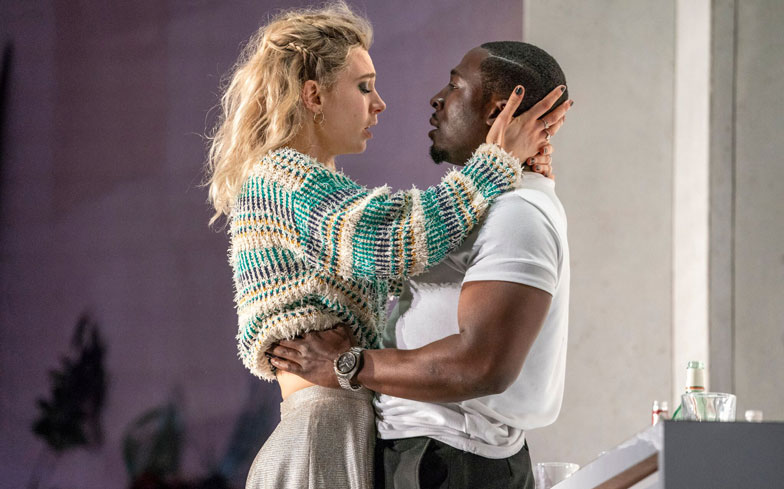 This updated reworking of Miss Julie relocates the action from 19th century Sweden to 21st century London. The newly-single Julie is celebrating her 30th birthday – again – by throwing a wild house party in her wealthy father’s abode, adjacent to Hampstead Heath. Downstairs in the kitchen, Jean and Kristina are tidying up while those pretending to be friends of the birthday girl revel above them. Crossing the threshold, Julie initiates a power game with Jean, which descends into a fight for survival.

It’s a bold and stylish reinterpretation of the text. We weren’t entirely convinced with the opening; it seems at pains to show the audience just how contemporary this rendition is, taking a long time to establish the scene and rather overstaying its welcome in the process. However, when the action finally started, we quickly warmed to it.

Starring in the title role is The Crown’s Vanessa Kirby. Her Julie is a 30-something party girl, a member of London’s social elite who has everything and nothing all at once; hugely privileged but lacking in purpose, she is someone who sleeps away her Monday afternoons and spends much of her time on stage drinking or taking drugs. Eric Kofi Abrefa impresses as cheuffer Jean and Thalissa Teixeira is convincing as live-in cleaner Kristina.

There is much here to enjoy. Vanessa Kirby is captivating throughout, although all three turn in commendable performances. The choreographed numbers are probably too frequent and indulgent, but that doesn’t make them any less impressive. There are a handful of genuinely shocking moments, too – bird lovers may wish to avert their eyes at one point, although that particular moment makes for compelling viewing. The set design impresses throughout, too – and there’s one moment right at the end which is simple but incredibly effective.

We did have a handful of minor niggles, however. We reviewed a version of Miss Julie recently at the tiny studio space that is the Jermyn Street Theatre and it felt like we were actually sat in their kitchen – it’s a play which really benefits from intimacy, which is slightly lost in the grandeur of the National Theatre. Additionally, while the issues of race and class are apparent, they are only touched upon in a very superficial manner. We also weren’t entirely convinced by Julie and Jean’s relationship – there was certainly chemistry, but it felt lacking in danger.

In the grand scheme of the performance these were only minor concerns, however, and didn’t detract from our overall enjoyment of the show. It’s a bold, stylish and slick reinterpretation of a classic text, featuring a handful of genuinely impressive set-pieces and solid acting throughout. Highly recommended.