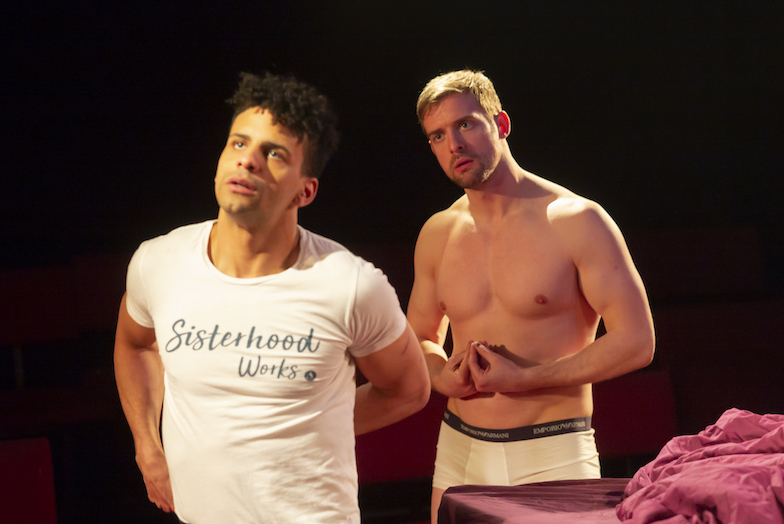 Undetectable feels like a play with its finger firmly on the pulse. The London Patient recently made headlines by becoming the second formerly HIV+ person to be cleared of the virus, while the current BBC documentary about Daryll Rowe, who intentionally tried to spread HIV, has once again put the virus – and its place in the LGBTQ+ community – firmly at the centre of conversations. Both have also had an impact in raising awareness of medical advancements in the treatment and management of HIV, too.

Tom Wright’s two-hander explores a range of issues including safe sex, honesty, identity, race and drugs. It tells the story of Bradley (Lewis Brown), a successful school teacher, and Lex (Freddie Hogan), a personal trainer. They met through an app but by mutual agreement have been taking it slowly; three months of getting to know each other, spending quality time together, cuddling, kissing… but no sex. Lex has decided that tonight is going to be the night, but Bradley isn’t convinced he wants to go all the way.

The play gets a lot right. Set entirely in, on, or around a bed, the intimacy and chemistry between the two men is believable. Both turn in impressive performances in what appear to be highly physically-demanding roles. The writing is smart and there are a handful of witty one-liners; we appreciated Bradley’s “I love talking to you” being answered by Lex’s deadpan “and I love listening to you” – it felt like a very real moment.

We had a few minor reservations, however. The pace is relentless – which generally works in the play’s favour; it held our attention throughout its 70-minute duration. We felt that some issues could have used a little more time to breathe and be fully explored, though – it briefly touches on the ongoing psychological impact of a HIV+ diagnosis, which is handled sensitively, but we’d have liked to have unpacked it a bit further before moving on to the next issue.

There is also a vast amount of assumed knowledge in the text. This is presumably fine for its intended target demographic, but those without a robust knowledge of London’s gay scene or advancements in HIV medication may be left scratching their heads at various moments.

These are minor criticisms of what is otherwise an impressive new piece of theatre. The writing is smart and topical, while the acting is absolutely first-rate. It may not get absolutely everything right, but there’s still plenty here to enjoy.