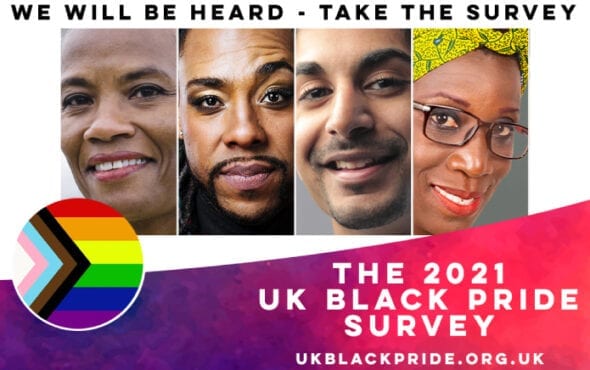 UK Black Pride has officially announced the start of its inaugural Community Survey, We Will Be Heard.

The survey, which is specifically aimed at LGBTQI+ Black people and people of colour, came to fruition after the release of the UK Government’s 2018 National LGBT+ Survey.

In the audit over 90% of the respondents were white, which gave little information regarding the African, Asian, Caribbean, Latin American, and Middle Eastern descent communities.

This inclusive analysis has also been backed by Europe’s largest LGBTQ+ charity, Stonewall.

Taking to Twitter, the UK-based organisation encouraged queer, Black and people of colour to take part in the research survey.

“UK Black Pride’s inaugural Community Survey aims to fill in the gaps in our understanding of what life is like in the UK for LGBTQI+ Black people and people of colour. Make your voice heard,” they said.

UK Black Pride’s inaugural Community Survey aims to fill in the gaps in our understanding of what life is like in the UK for LGBTQI+ Black people and people of colour. Make your voice heard. TAKE PART: https://t.co/0vmfR5eubA pic.twitter.com/oI1hMQb04f

Lady Phyll, co-founder and executive director of UK Black Pride, also released a statement regarding the origins of We Will Be Heard.

“Building this survey has been a labour of love. As we looked for a survey company to help us develop and deliver our inaugural survey, we were told countless times that we’d be ‘lucky’ to get 1,500 respondents,” she explained.

“Our communities remain overlooked and underestimated, but it may be that the right people aren’t doing the asking. So we’re stepping up to ask what the communities we represent feel, need and find joy in.

Last month, the organisation announced that this year’s theme would be Love and Rage. The topic is meant to acknowledge the difficult 12 months for so many people within ethnic minority communities.

UK Black Pride 2021 is set to take place on 2-4 July. Due to the uncertainty regarding the ongoing pandemic, the event will once again be held digitally.