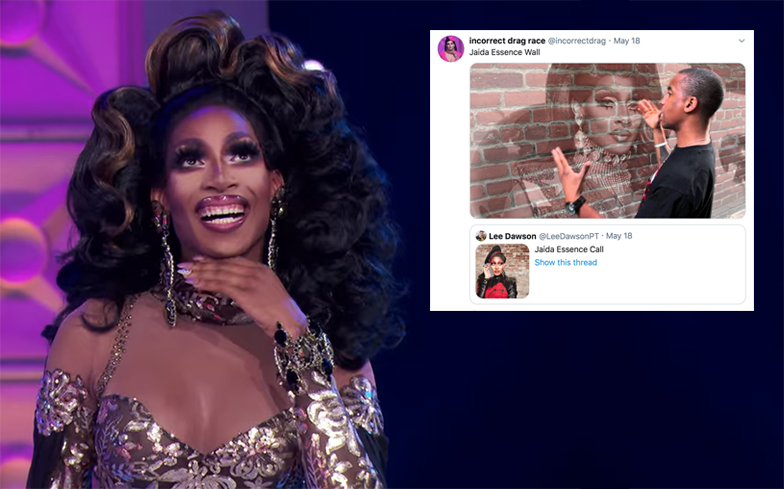 Over the past week, fans have been editing the Drag Race season 12 finalist into hilariously ridiculous situations that rhyme with her last name, Ball, and – to quote the infamous words of Laganja Estranja – it’s “TOO FUCKING MUCH!”

The memes began after Drag Race content creator, Lee Dawson, noticed the star’s name was edited to ‘Jaida Essence Ball’ by the show’s editors when she sashayed down the runway for the ball challenge earlier this season.

“How did I not know this!?” Jaida responded and honestly, same?

One of Jaida’s stans later spotted the change of her name to ‘LeBron Essence Hall’ when she served Basketball Wife Realness in the same episode. These Drag Race producers know how to have a good time, don’t they?

Suffice to say, Gay Twitter erupted at this point. We haven’t seen this many Drag Race memes since Miss Vanessa ‘Vanjie’ Mateo recited her name 16,782 times after she sashayed away (backwards) in the season 10 premiere.

Jaida going viral feels… correct. Get your jush with the best memes below (chile).

Jaida even had a whack at it herself and yes, we can confirm that she did understand the assignment.

The winner will be decided on 29 May in a “revolutionary” virtual lip sync for the crown with “innovative technology that highlights the creativity of the queens.”

And this Friday (22 May), RuPaul will host a “virtual slumber party” for the reunion, in which he will reflect on the events of season 12 and check in with the queens to see how they’re coping in self-isolation.

Related: Meet the 12 queens competing on the first season of Canada’s Drag Race.

Related: Trinity’s homage to Drag Race UK winner The Vivienne is everything.