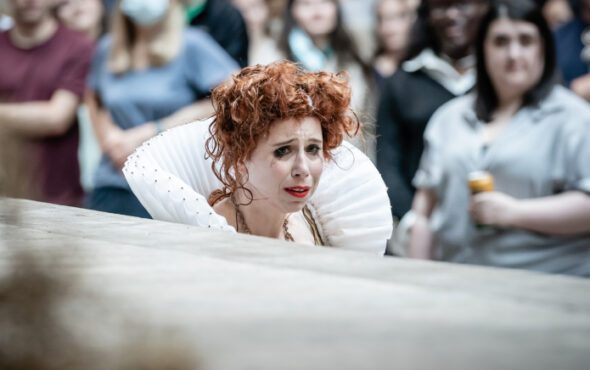 Since lockdown restrictions eased, much of the theatre we’ve seen has been uplifting – and this comes as no surprise. After a challenging time for the industry – and for all of us – there seems to be a real appetite for escapism, with musicals and other feel-good theatrical delights filling the West End. This clever re-imagination of Twelfth Night sits nicely in the mix – it may not be the funniest show in town, but it’s one of Shakespeare’s more humorous plays and features lots of comic characters. This production is also full of music and some of the performances here are really great.

The gender- and colour-blind casting of this show works a treat: there are numerous examples, of which Nadine Higgin as Sir Toby Belch is just one. She illuminates the stage from the moment she staggers on with a crate of beer – whether striking comedy gold, or demonstrating impressive vocal prowess, we couldn’t take our eyes off her. There are numerous comic characters and each actor hits the mark – whether that’s Aguecheek (George Fouracres) playing a wonderful fool in jazzy pastel attire, or Victoria Elliott’s knowingly smart but silly Feste.

The play famously starts with the line ‘If music be the food of love, play on’ – and this staging features a wide variety of songs throughout. These are shared democratically between the actors and never feel forced: they evolve out of the on-stage action. We wouldn’t want to single out a particular highlight, but the overall effect works well and there are some tremendous vocals on display here. The band sounds great, too. We had a really fun evening with Twelfth Night – this is a faithful production but it’s full of creativity and imaginative twists. The set is deceptively simple but utilised effectively; the acting is strong, as is the singing; the comedy moments hit the mark, yet it maintains a sound level of tonal variety. It’s worth noting that this is probably the longest play we’ve seen that doesn’t have an interval – clocking in at comfortably over two hours – so factor that in when planning your evening. With that in mind this is absolutely worth venturing down to the Southbank for – a perfect way to spend a late summer’s evening.