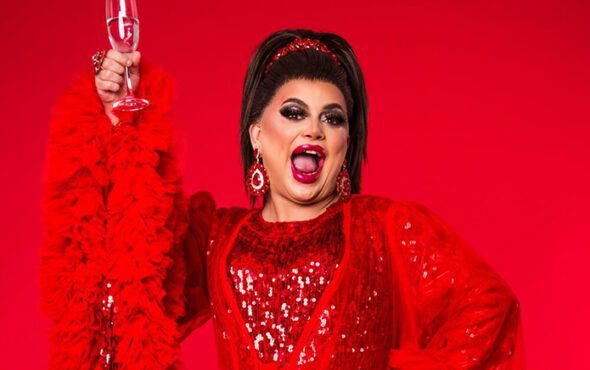 TuckShop, who brought us the ridiculous all-drag murder mystery Death Drop earlier this year, have been delighting audiences with a wonderfully varied festival of all things drag.

We were hoping to catch a whole host of shows that TuckShop have been putting on at the Garrick Theatre in London’s West End over the last two weeks, but a Covid app ping meant we couldn’t make any of the events during the first week of the festival. Sadly that meant we missed out on shows from the likes of Joe Black, Ginny Lemon, Baga Chipz and Gals Aloud.

As well as showcasing some of the biggest names in British drag, the festival has been shining a spotlight on artists who we may not normally see in such major venues. These performances have included All the King’s Men, a night to celebrate drag king excellence, and an evening with the Cocoa Butter Club, a collective who – in their words – have set out to decolonise and moisturise dry and dusty drag spaces.

We caught two shows during the second week of the festival, the first of which was The Bitten Peach, who are a Pan-Asian cabaret collective. Their variety show treated the audience to two hours of quirky delights; whether we were being given a unique insight into Indian classical dance from the captivating Dosa Cat, being serenaded by Mahatma Khandi’s unconventional performance of A Thousand Miles or enjoying ShayShay’s take on K-Pop, we were constantly delighted by a show quite unlike any we’d previously seen in the West End. The evening was brilliantly hosted by Lilly Snatchdragon, who possesses both a natural charm and a wonderfully filthy sense of humour.

The second show we saw was called Drag Me to the Musicals and featured a selection of our favourite British drag queens, including Poppycock, Ophelia Love, Me, Anna Phylactic and Kitty Scott Claus. The night was basically our idea of heaven – drag and musicals, what’s not to love?! The show featured a mix of live vocals and lip sync performances as well as a rather eclectic mix of music. Do Defying Gravity and Oom-Pah-Pah really belong in the same show? They do now! It was a weird, wonderful, camp and chaotic evening, and we had an absolute blast.

So what’s next on the horizon for TuckShop? Well, following a successful West End run we hear there are plans afoot to tour their hit show Death Drop around the UK, and in London they’ll be hosting some nights at the Underbelly Festival, with their Sickening ’90s Drag Prom returning in September. But we’re sure there’s much more on the horizon – we can’t wait to see what happens next!