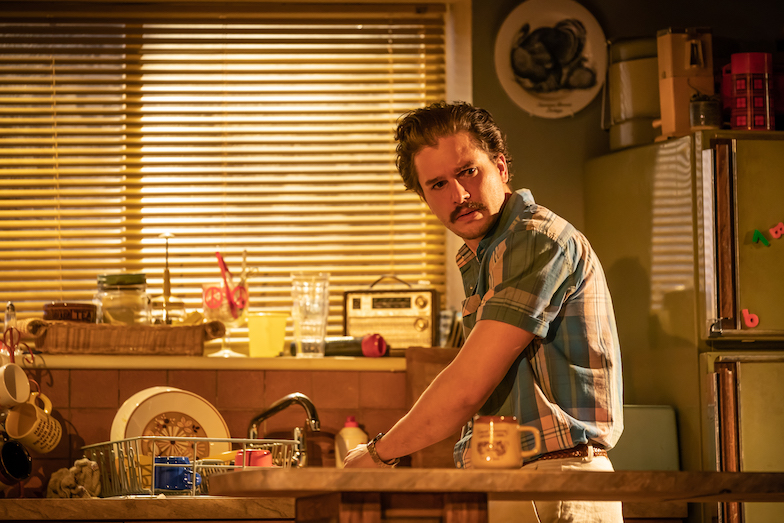 True West tells the story of Austin (Kit Harington) who is working on a movie script which he has just pitched successfully to a producer. The day before the important meeting to talk figures with said producer, Austin’s estranged brother Lee (Johnny Flynn) walks back into his life. Not one to watch quietly from the sidelines, he pitches his own ideas to the producer which results in some far reaching consequences for the two brothers.

It’s a story with potential but we didn’t feel it was executed as well as it could have been. In particular we felt that the pacing was off – given that the difficult nature of the brothers’ relationship is apparent from the opening scene, this dynamic isn’t really explored in an interesting way until after the interval; most of the first act feels a bit slow, safe and predictable. Speaking of the interval, we also felt that both acts were so short that the play could easily have been performed straight through.

The acting is reasonably strong throughout, although again we thought it improved in the second half. We felt that Flynn’s Austin was a bit one-dimensional in act one and we didn’t really warm to him – although granted, he wasn’t supposed to be playing a likeable character – but we bought into his more varied and humorous performance in act two. Harington was strong throughout with a nuanced performance that developed into something really quite enjoyably unpredictable by the play’s conclusion.

We did have one major reservation, however, in that we were never really sold on the idea of them as brothers – they seemed quite mismatched. There’s a scene where they’re reminiscing about their past and how they both used to wonder what the other was up to, and which one had the right idea about life – but it’s just not terribly convincing. We found it hard to believe that they had a shared past and took an interest in each other’s lives, or that they each had qualities that the other would like to emulate.

It’s a shame really as there’s plenty here to recommend. There are numerous entertaining moments, the acting is strong in places, and story is pretty interesting, particularly in the second half. However, True West never really feels like it adds up to more than the sum of these parts, resulting in an intriguing production which slightly misses the mark.