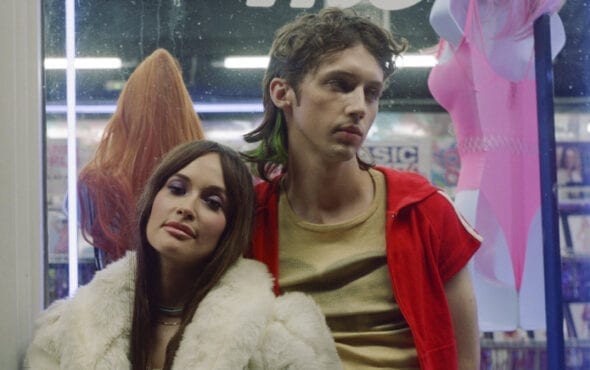 Troye Sivan has dropped the video for his Easy remix.

Thanks to Mark Ronson, the 80s-inspired synthpop number has been given a tempo boost and features a new verse with Grammy Award-winning country icon Kacey Musgraves.

Directed by Bardia Zeinali, who also directed Troye and Ariana Grande’s clip for Dance To This, the cinematic visual is set in Nashville and features both stars as runaways in various country-inspired settings.

In a tweet, the Aussie singer-songwriter called it his “fave music video ever” and said both Mark and Kacey “made the song a million times better.”

Mark wrote: “I’m such a fucking fan of these two. And they’re both quite beautiful humans. It’s a gorgeous song. The video is ridiculous. I can’t wait to share this on Wednesday.”

It marks the second collaboration between Troye and Kacey after the latter’s Christmas track Glittery (From The Kacey Musgraves Christmas Show).

The original version of Easy appears on Troye’s fifth EP, In a Dream, which also includes pop anthems such as Take Yourself Home and Rager Teenager.

The first music video saw the star embrace his inner Ziggy Stardust era David Bowie – back-up dancers and all – and Elio in Call Me By Your Name. You can watch that here.

Easy (with Kacey Musgraves and Mark Ronson) is now available on streaming services – listen to the song here on Apple Music and watch the music video below.