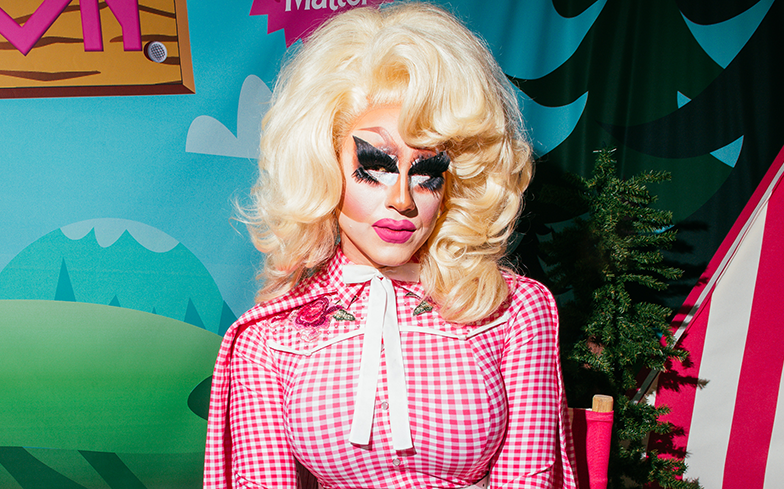 “It kind of makes you think they must have decided that tie in the past like, month.”

Since then, Trixie – real name Brian Firkus – has toured the world in support of her critically-acclaimed country albums, Two Birds and One Stone, and received her own real life television series with comedy partner, Katya Zamolodchikova. So yas, she has been very successful!

Over the next month, Trixie will be headlining her own UK tour, aptly named Skinny Legend. Before her sold-out show in Brixton on 23 February, we caught up with the former Gay Times cover star to discuss normal things: The Cock Destroyers, Buffy the Vampire Slayer and… death.

Oh, and she spills some majah T on the gag-worthy All Stars 4 crowning. Have fun reading!

Hi Trixie how are you?
Look at your phone case! Oh my god I love that.

It matches my vape.
Your vape! Vaping seems very big here. I’m really happy for you. You’re really doing it in style. I was on a date with a guy once and he was vaping.

How did that go?
I was date vaped. I’m a vape survivor. Thank you for asking me about that. I’m okay.

Sure. So what’s your favourite Buffy episode?
Conversations with Dead People.

Who would win in a fight, Buffy or Katya?
Oh Buffy the Vampire Slayer. A superhero or a crackhead?

Right. And what keeps bringing you back to the UK?
Well, some would say it’s for the weather but it’s for the money. Also, Percy Pigs. Also… Well, that’s about it. I do like to shop for cosmetics at the Superdrug, or the Boots No. 7.

What is the biggest difference between UK and US Drag Race fans?
The drag fans here wear more makeup. Most of my shows are women and gay couples, and mother/daughters types.

Also I’ve noticed quite a lot of cisgender queens coming to Trixie Mattel shows.
Yeah, a lot of girls in drag! I have more female fans than any other queen, I think. I also have a lot more fans than other queens and I think it’s because the women like the Trixie thing a lot, which is great, because I love women, so.

Dream job?
Yeah, exactly, yeah. But I’m excited to see her breasts in real life. I know it’s kind of inappropriate but it seems like she’s really short and they’re really big.

Every time I go onto my news feed I see ‘Trixie Mattel retweeted…’ and it’s either Sophie or Rebecca.
Yeah, there was a video earlier today like ‘There was this guy and I guess I accidentally destroyed his cock’ and it was just a skeleton. I remember the article that came out about them and it was Huffington Post and it said, ‘The Cock Destroyers are proof that the internet has no chill.’ I remember thinking that was so funny. So, Monét X Change and Trinity The Tuck – joint winners. You gagged?
I am gagged. I had no idea, because I was there when we filmed it. We didn’t film a tie, so I didn’t think there could be a tie. We only filmed one of each winning. If you watch it, they spliced the two together. It didn’t really happen. It was only supposed to be one or the other. So I will say, it kind of makes you think they must have decided that tie in the past like, month. A year ago, they didn’t think it was gonna be a tie. So whatever reason they decided, they decided recently.

If this was an option on All Stars 3, who would you have wanted to be crowned with?
Oh Shangela! Totally. Shangela would be a great person to win with or even lose against.

Who are you rooting for on season 11?
I like Brooke Lynn and I like Nina. I’m really into Plastique, that little girl.

And because you’ve been to the UK many times, you must have a few queens you’re rooting for on Drag Race UK?
Yes! I’ve been here twice a year for like four or five years. What counts as the UK? Are they gonna count Ireland?

Will she lip sync this time though?
Listen, I lost every lip sync except one… And I won Drag Race, so.

True. Monet said she wants to appear on a winner’s season – are you in?
No. Never. I would never go back and do it. I’m not very competitive.

Do we have an update on the second season of The Trixie and Katya Show?
Well, we have moved back to YouTube so we’re on season four of the YouTube series now. Well last year, Katya had a health thing, so we can’t really continue with the show anymore.

How was it continuing on with Bob last year?
It was fine. Bob was my first choice if anyone had to come in, so I just called Bob and he was like, ‘Yeah, I’ll be there.’

Was that hard? Because it was on air at the time…
No it wasn’t bad for me. I’m a consummate professional so the show must go on – you know?

Everything that happens on a daily basis then.
Right? So I wanna talk about suicide and we would like to get more into hot button issues… We’re not political, but y’know. I don’t think anything’s really off limits. I think most things are made worse by not talking about it.

What’s the scariest thing you’ve experienced since becoming a drag queen?
I gained 30 pounds. That was pretty rough. It happens so slowly, like, you gain weight so slowly that you don’t even realise. Then all of a sudden, one day I was like, ‘Umm, nobody told me.’ I said to Katya, ‘How did you not tell me?’ She was like, ‘I thought you knew.’ I was like, ‘No.’ And she was like, ‘What did you want me to do?’ I’m like, ‘You slap the fucking donut out of my hand and help me.’ Know what I mean?

Oh yeah. And what has been your weirdest fan experience so far?
Oh just like people crying and fainting. I just did a meet and greet tonight and there was at least five tattoos. Just tonight. Of my face and stuff. One girl had one on her leg and one had two on the back of her leg.

A lot of Trixie Mattel fans seem to be straight white women – why do you think that is?
I don’t know. I think gay guys aren’t good at rooting for gay guys in general. Gay guys don’t want gay shit. Gay guys want women shit. Do you know what I mean? So like, gay guys do support drag queens, but they’re not fanatics. Gay people are too cool for everything.

And finally… I asked Tammie Brown last year and now it’s your turn: life, what is the meaning?
Ole Henriksen Transforming Walnut Scrub.

Trixie Mattel will be touring the UK until 9 March. Check out the rest of the tour dates below.

You can purchase tickets here.