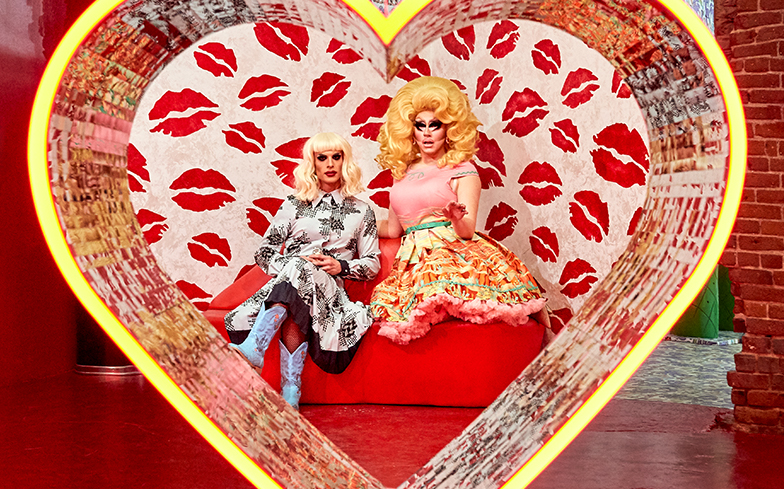 As they bathe in the success of their new show on Viceland, we caught up with the funniest duo in RuPaul’s Drag Race herstory: Trixie Mattel and Yekaterina Petrovna Zamalodchikova (your Dad just calls her Katya).

Trixie and Katya both entered into season seven of Drag Race, but have since found their own fame thanks to a viral web series with an impossible name. Recently swooped up by Viceland, the two have made a name for themselves with their weird, green-screen-tastic presence on YouTube.

Related: Here’s where you can watch Drag Race All Stars 3 in the UK… (and it’s not Netflix)

As Trixie prepares to enter the All Stars 3 arena and work the runway yet again, she’s taking as many tips from All Stars alum Katya as she can…

T: “She said: ‘Don’t be a dick’. That’s literally what she said,” Trixie told Gay Times.

“If you watch All Stars 2, it got easy for Katya once she got out of her own way. It’s kind of the key to every aspect in real-life drag too.”

Katya explaining: “Yeah you gotta allow yourself to make mistakes and literally just move right along. I wish I thought of this earlier because it would have helped me. You’re going on the show not as a contestant, but as an unpaid, uncredited writer.” As drag continues to evolve exponentially after the mainstream reception that Drag Race now enjoys, the duo worry that the core purpose of drag performance has been lost on the show’s younger audience.

“I think everybody should like drag, but not everybody should do it. In some ways, the popularisation of drag has made it look like the point of it is getting attention and so I think there’s a huge surge in this industry. But, maybe a lot of people are doing it for not the right reasons,” Trixie told us.

Katya adding: “People are not having fun with it anymore which is very strange. And also, people are thinking it’s some legit profession like being a docent at a museum. People are confusing it for a legitimate career path which it absolutely isn’t.” You can read our full interview with Trixie & Katya in the latest issue of Gay Times, available to buy here.